I freaking love this![1] It certainly doesn’t get any more American or patriotic than this. Metallica is one my all time favorite bands and this rendition of the National Anthem ranks only second to Whitney Houston’s memorable version. Loved the armed forces and the American flag as well. It really moves you, unless of course you are a Marxist. No wonder they went wild over this fantastic performance. The NBA Finals and Metallica – it doesn’t get any better than that. 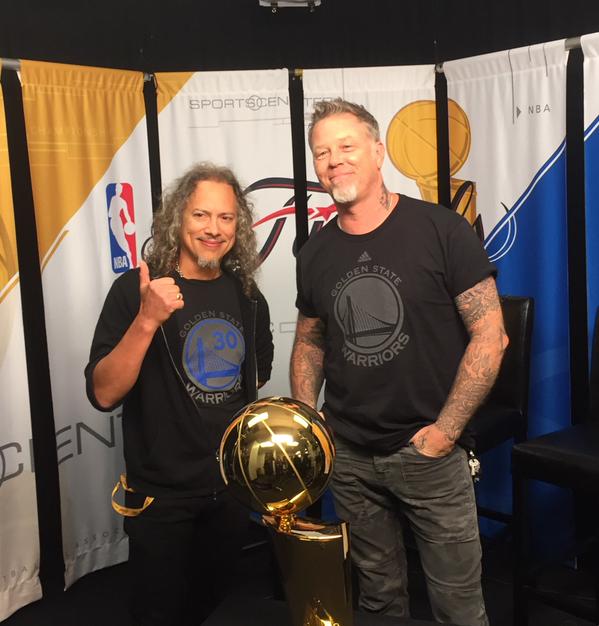 As members of the U.S. armed forces proudly held a giant American flag, Metallica performed a metal version of the national anthem that had the crowd at Game 5 of the NBA Finals going wild on Sunday night.

It doesn’t get much more American than that.

The Cleveland Cavaliers traveled to Oakland, California, to take on the Golden State Warriors in Game 5 of the NBA Finals on Sunday with the series is tied 2-2.

The Warriors were leading the Cavs 73-67 in at the end of the third quarter.

What a way to open a game! Very tastefully done and absolutely perfect. Metallica is still out there and still just incredible. They are aging very, very well. Nice to see living legends do justice to the flag, the military and the game. No shrieking, no rap and no wardrobe malfunctions… imagine that. This is true talent and I’m glad to see the fans appreciate it. Not all of them, but most of them. Metallica is one of the best to ever come out of San Francisco – I’d go to the game just to watch them perform. But I’d love the game too. Well done, guys.