Just stunning photography – timelessly beautiful. This takes globe-trotting to a whole new level. German astronaut Alexander Gerst has put together this timelapse footage from the International Space Station. I would say he had the best view on the planet. Filled not only with incredible pictures of our beautiful planet… there are shots of the Space Station and space itself that are something to behold as well. The most impressive shots are of the auroras, which are like emerald fire across the vistas of earth. This video simply leaves you in awe of nature.[1] 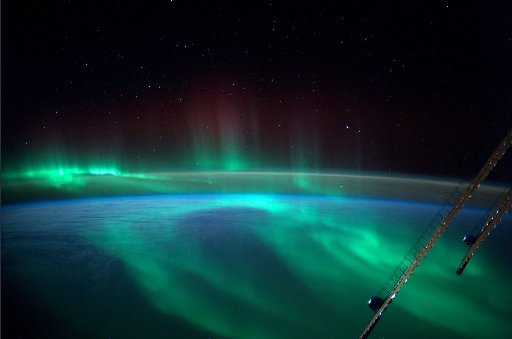 During his six-month “Blue Dot” mission on the International Space Station, German astronaut Alexander Gerst would often leave his camera running while he worked and did experiments. He shared many of the resulting images during his journey, which turned him into something of a social media celebrity — Twitter’s introduction to the awe-inspiring views of space travel.

Now back on Earth, Gerst has released a six-minute timelapse made up of some of the best shots from his ISS tenure. The video includes auroras (several, in fact) clouds, stars, oceans, lit-up cities, lightning, and glimpses of both the ISS and other spacecraft.

Even if you don’t have time to watch the entire thing, you’ve got to catch the last aurora at the end (at 5:28).

This video features 12,500 images from Gert’s camera, but you can see the rest of his ISS shots at his Flickr page[3]. To find out more about the science experiments Gerst ran while his camera was taking in the sights, check out the European Space Agency’s blog[4].

I have been blessed to be able to travel to many places people never get to see. I have witnessed the majesty of the Tetons and Yellow Stone Park. I have gone spelunking near the Carlsbad Caverns, which I also went through. I have roamed pine littered beaches in Oregon and on numerous coasts. I have caught my breath looking out over the Grand Canyon. And I literally lost my heart to Lake Tahoe years ago. But seeing this footage rekindles my love of our world all over again. There is no way that I could see what I have seen and have gone so many places without believing in the divine design and creation of God. It moves your soul.