Feminazism has reached the point where you can’t even say something nice without getting your knuckles rapped:

Steve Martin was forced to delete his Twitter tribute to the late Carrie Fisher after critics labeled the remembrance as ‘sexist’. …

‘When I was a young man, Carrie Fisher was the most beautiful creature I had ever seen. She turned out to be witty and bright as well,’ the comedian wrote on Twitter.

Some on Twitter came out to criticize Martin’s post however, saying that his attention first on her physical appearance before her personality wasn’t the right way to remember Hollywood princess.

If only Princess Leia were around to rescue Martin from the P.C. Stormtroopers.

Also regarded as political incorrect are pictures of Princess Leia in a golden bikini after she was captured by Jabba the Hutt — although she said that strangling the Michael Moore-like monster with the chain he made her wear was “the best time I ever had as an actor.” 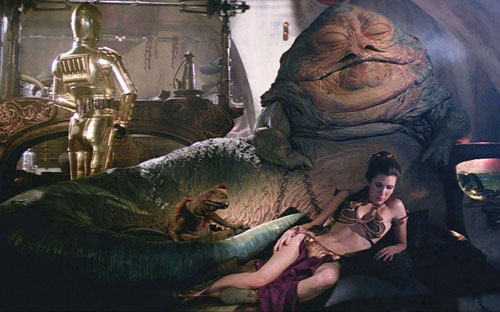 Candidate photo for the memory hole.

On tips from Varla and Saxon Warrior. Cross-posted at Moonbattery.