“I’m getting a little nervous,” he says. You’ve got to be kidding me. It’s an incredible stunt and gets him fame and kudos, but face it folks… that’s a suicidal dive down that crevice. One wrong swish and you are toast. Rock is a very unforgiving embrace. A 31 year-old daredevil took the 30-second ski trip of his life in a death-defying (and nuts) traverse of a 5 foot wide crevice in Alaska. He won the 2014 Powder Awards in Salt Lake City for skiing the most challenging line of the year. He’s far braver than I am.[1] 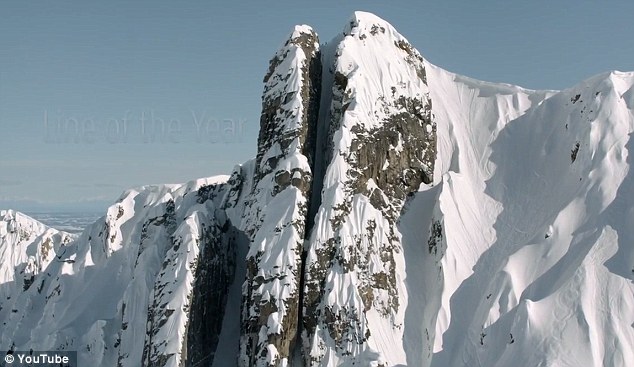 Terrifying: This is the moment a daredevil skier flies down a vertical crevice in the Alaskan wilderness.

This is the moment a daredevil skier flies down a vertical crevice in the Alaskan wilderness.

Cody Townsend, 31, from California, took to the Tordrillo Mountains, 75 miles northwest of Anchorage to perform the death-defying stunt.

A video shows him peering down the run before taking a deep breath and bombing it down at high speed.

He is seen weaving steadily through the snow, managing to avoid the sharp rock which towers above him on each side.

Townsend told the Daily News[3] that the chute was around five to six feet wide at its narrowest, leaving little room for error.

It takes him just 30 seconds to complete the steep course.

‘Holy f***!’ he exclaims as he exits the chute into daylight.

Townsend was honored Saturday at the 2014 Powder Awards in Salt Lake City for skiing what was deemed the most challenging line of the year.

The sportsman can be heard saying, ‘oh, I’m getting nervous,’ before his descent but his run was completed without consequence.

Townsend says that he’s ‘never skied to win an award’ it’s just a passion he’s had since childhood.

There is apparently no official name for either the peak or the chute which Townsend tackled.

‘There are so many mountains in Alaska that only the biggest and most iconic peaks tend to have official names,’ he said.

‘We have some unofficial name for the zone and for the chute, but they’re pretty vulgar and not quite fit to print.’

Townsend’s video, titled Days Of My Youth, has been viewed more than 1.3 million times to date with many applauding the skier’s mind-boggling skill.

That took a hell of a lot of skill to do and I can see why the video went viral. I can’t believe he did it, much less survived it. It looks like a fairly straight drop. The height is bad enough, but it’s the pants wetting chute with the solid slab wall of granite on both sides, close enough to reach out and touch at high speed, that gets me. It feels like the punchline for a Looney Tunes skit. But he did it – he traversed the crevice from heaven to hell and lived to tell the tale from his days of youth.