The Death of the TV Butler–Literally

A little break from politics today…

TV, movies, and literature used to be filled with Butlers, that manservant to the well to do. But the character device has fallen out of favor lately, so much so that if an actor was famous for playing a butler, he’s probably dead!

Of course, one of the most famous butlers in entertainment history is Reginald Jeeves of the novels penned by P. G. Wodehouse. Jeeves was brought to life on British TV in the early 1990s by comedic actor Stephen Fry. Thankfully, Fry still with us, of course, but the character is an old one having first made the literary scene in 1915.

The most recent TV butler is Mr. Carson on the well-loved British series “Downton Abbey.” Mr. Carson is played by actor Jim Carter who is also still very much alive as this show is still in production. We were also recently treated to actor Forest Whitaker in the schmaltzy movie “Lee Daniels’ The Butler,” a 2013 film also starring Oprah Winfrey. Certainly Whitaker is still alive and working in Hollywood. But a whole host of other film and TV butlers have passed on to that great mansion in the sky and the role of the butler is not used much these days to bring us new ones to replace them. 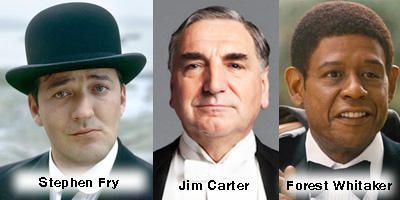 Alfred first appeared in the comic books in 1943, and most recently famed actor Michael Caine took the role for the Christopher Nolan “Dark Knight” series of Batman movies. Caine is very much with us, granted. We also hear that Jeremy Irons will be taking the role of Alfred in next year’s Superman sequel, “Batman vs. Superman”–he’s also alive and kicking, naturally. 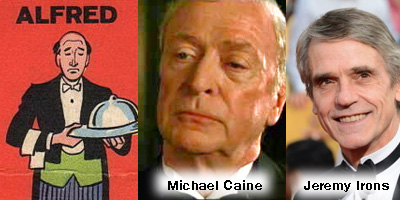 The two mentioned above aside, Alfred has also been personified on TV and in film by several other actors all of whom are dead. In the late 1960s Alan Napier took the role of Bruce Wayne/Batman’s trusted servant. Napier passed in 1988. Later, when the Batman movies started making headway in the series begun by director Tim Burton, Michael Gough played the famous manservant. Gough died in 2011. Ian Abercrombie also played Alfred for the one-season-long series “Birds of Prey.” He died in 2012. And at least two others who played Alfred in the 1940s era movie serials are also dead. 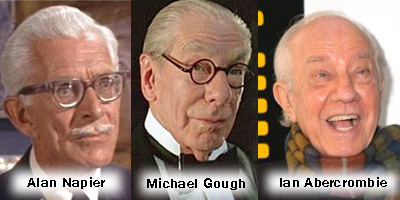 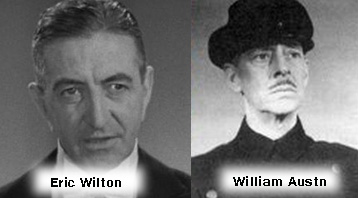 Another famous movie butler is Godfrey from the film “My Man Godfrey.” He was played to a “T” by actor William Powell, one of the most famous actors to ever appear as a butler. Powell went to his reward way back in 1984. Another great movie butler was Mr. Coleman from “Trading Places.” Actor Denholm Elliot died in 1992. Then there was the patient and wise Hobson from the movie “Arthur.” Sir John Gielgud filled the role perfectly. Sir John is now serving in the afterlife having died in the year 2000. 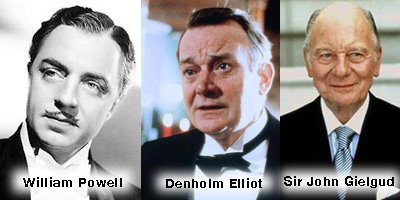 There is also a long list of TV butlers, many of whom are dead.

One of the earliest to pass away on us–and tragically so in his case–was “The Green Hornet’s” Bruce Lee who played kick butt steward Kato. Lee died in 1973 from a bad reaction to pain medication prescribed to him by a doctor.

Next we lost the amiable Sebastian Cabot, Mr. Giles French from TV’s “Family Affair.” Cabot left us in 1977. Only a few years later, in 1979 we lost Ted Cassidy who was Lurch from “The Adams Family.” In 1980 Chinese-American actor Victor Sen Yung died. He played the Cartwright’s Chinese major-domo Hop Sing on “Bonanza” from 1959 to 1973. Next, in 1983, William Demarest died. Demarest played the avuncular Charley O’Casey on “My Three Sons.”

In the 1980s TV was still using the occasional butler character and one beloved iteration of the role was the character Max from “Hart To Hart.” Actor Lionel Stander died in 1994 a decade after his show was canceled. Another beloved butler was Lynn Belvedere from the show “Mr. Belvedere.” The man who brought Belvedere to life, Christopher Hewett, ended his in 2001 (As did Clifton Webb who played the same character in the 1948 film “Sitting Pretty.” Gone in 1966). 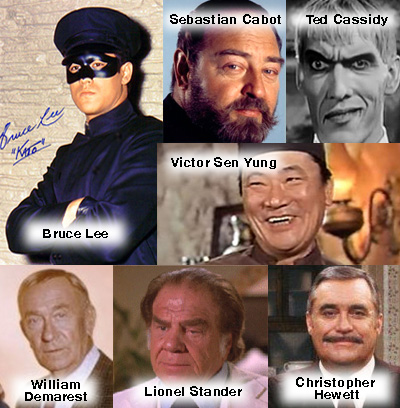 Those Still With Us

Granted some of our latest most loved TV butlers are still alive, though some, like actor Robert Guillaume, are not doing well. Guillaume, who played the character Benson DuBois on “Soap” and the later spinoff series “Benson,” has had several strokes and is not in good health. But he is still hanging in there.

As to some other keepers of the house, John Hillerman, who played Jonathan Higgins of “Magnum PI” fame, is still with us–though he was more like an estate manager since his master was never around, so maybe this character doesn’t apply as a “butler”. Regardless, a few other butlers are still among us. Joseph Marcell, who starred as Geoffrey the butler from “The Fresh Prince of Bel-Air,” is still plodding along we hear. And Daniel Davis, Niles from “The Nanny,” is also still alive and working. Two other actors who played sort of butler-like characters, Tony Danza of “Who’s the Boss” and Scott Baio of “Charles in Charge” are also with us yet today–though they weren’t strictly butlers as they mostly tended to the children instead of masters.

Where is Today’s Dutiful Manservant?

In any case, the idea of having a butler on a TV show may seem somewhat old fashioned, or shockingly too bourgeoisie for today’s TV writers to contemplate these days, but it is a tried and true character nonetheless.

Still, it is telling that the only butler on TV today is one invoking the late days of the British Empire on “Downton Abbey,” a character that if he were real people would long since be dead today.

In that case, the butler is dead, indeed. Quite dead. And so, maybe, is the role of the butler for future entertainment.

Yes the butler is a character that has been out of fashion so long that most of the actors that famously had the opportunity to bring such a part to life are now long dead.