VIDEO: Have you Ever Seen A Dog Pet a Human?

Dogs love humans as no other species does. Here’s a perfect example in an adorable Yorkie, named Rilo, who cuddles with his friend Ricky and pets his face. What’s good for the pup, is even better for the owner evidently. This is your puppy cuteness for the day. You’re welcome[1]. 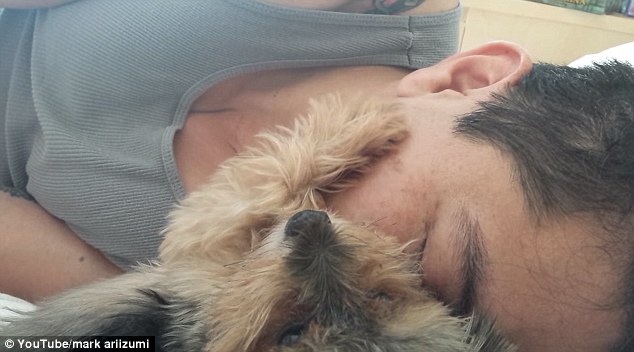 Who said pets can’t be good at petting too?

The little pup is seen gently paw-stroking his human friend’s face over and over.

As the petting takes place, Ricky lays still with his eyes closed.

‘Have you ever seen a dog pet a human?’ the cameraman asks.

To date the video of the affectionate Yorkie has been watched more than 500,000 times.

Many viewers have deemed the pup ‘cute’ and ‘adorable’.

‘Sweetie pie loves its human!’ one fan exclaimed after watching Rilo in action.

Rilo’s claws must be well trimmed or a red track of affection would surely be left on Ricky’s face. Rilo pets Ricky with all the love and affection a pup has in him, letting Ricky know that he is loved and adored. No wonder this video is viral. I have seen many dogs pet humans and it is a heartwarming display of affection. The innocence, devotion and love of a dog is a unique and very special gift in a human’s life. It redeems us and saves us from ourselves. They are called Man’s Best Friend because they literally are. Has your pup petted you today? If not, they will at least snuggle with you and give you a slobbery kiss, along with a tail thumping. Their love is unconditional.