Over 100 Years Later, Progressive Logic for Prohibition Being Used to Promote Action on Climate Change

Today at All American Blogger[1], I wrote about the 80 year anniversary of the freedom movement’s victory over progressivism when Prohibition was repealed. 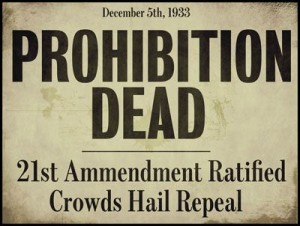 While it was overturned 80 years ago, the movement started way back in the 1800s.

In my article, I quote two people. Historian William O’Neill and progressive advocate for Prohibition, James A. Timberlake.

Historian William O’Neill said “among middle-class people in the progressive era, no cause was more respectable or ardently fought for” than prohibition. He also said, “Prohibition was typically progressive in that it was based on scientific premises, advanced in an organized and efficient manner, shrouded in moral hyperbole and expected to produce fantastic results.”

One of the more ardent advocates of Prohibition was progressive James H. Timberlake, who wrote a book called “Prohibition and the Progressive Movement[3].”

“The moral idealism of Wilsonian progressivism, the growing cult of efficiency and the intense absorption in material progress, the widening knowledge of the scientific case against moderate drinking and the increasing public hostility to the liquor interests, all gave prohibition added momentum.”

Now I want you to read that again, only pretend they aren’t talking about Prohibition. : Instead, they are talking about Global Warming or Climate Change or whatever they are calling it this week.

“…it was based on scientific premises…” equals “we have a scientific consensus.”

The gospel of the Church of Global warming is certainly “advanced in an organized and efficient manner” and “shrouded in moral hyperbole.”

And, of course, switching from oil and coal to windmills and solar is “expected to produce fantastic results.”

It’s the same old recycled logic, only instead of taking your booze, they want to take your SUV…and your steak…and control of your thermostat.

There’s nothing new in progressivism. : It’s the same old ideas presented under a different banner.

There’s no reason to think it will result in anything this time around except yet another spectacular failure.