A Drone Surveilled A Pig Farm To Discover It’s Not Really A Farm, But Something Much More Disturbing [Video]

I don’t have a problem with pig farms — we have to get bacon somehow, right? But, giant sewage ponds that are sprayed on people’s homes[1]? Gross! 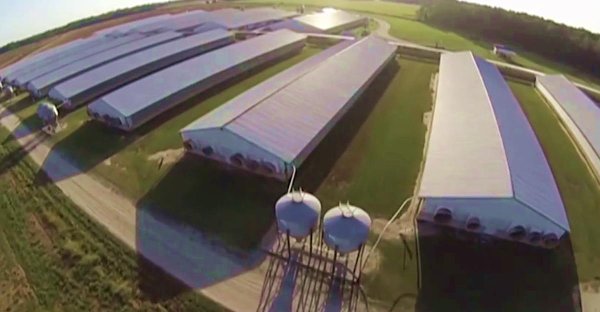 Bacon’s a thing these days. Yummy and bad for you — mmmm. But here’s what a drone saw when it payed a visit to some pig “farms” run by the world’s biggest pork producer.

Drones get all kinds of places that can be hard to check out.

The owner of this drone, filmmaker Mark Devries, had an idea of what he’d discover here, but still … whew.

He wanted to get a look at some pig farms operated by Murphy-Brown, a subdivision of Smithfield Farms, far and away the world’s largest pork producer. There are over 2,000 farms like this in North Carolina[2] alone.

As the drone comes over the trees, it comes across a lake.

But that’s no lake at all.

And it’s the size of four football fields.

Beyond the lake are buildings in which thousands of pigs live, often packed in so tightly they can’t even turn around. For months at a time.

….When the pigs poop and pee, it falls through slats in the floor and gets flushed out into the “lake.”

And it gets worse.

The operators of the factory farm have to clean out the cesspool when it gets too full. How do they do it?

They spray pig waste over the fields around the farm — and over neighbors’ homes.

I’m not a big fan of lawsuits, but if someone regularly sprays pig urine and pig feces on your house, I’d be inclined to award seven figures if I was on the jury.

* The original story was rewritten at 2 pm EST.