EPA May Crack Down on Wood Stoves in Alaska

New Year’s Eve was cold and rainy here in Phoenix. It would have been nice to have a fire in the fireplace without worrying about a fine. But no; the enviro-authorities decreed it to be yet another “no-burn day.” I shouldn’t complain though. It’s much worse in Alaska:

“It’s all one thing — when you most need the heat is when you’re most apt to create a serious air pollution problem for yourself and the people in your community,” said Tim Hamlin, the director of the office of air and waste at the E.P.A.’s Region 10, which includes Alaska. …

Civil fines by Fairbanks North Star Borough — which includes the cities of Fairbanks and North Pole, with a total population of about 100,000 — could be assessed in coming days against residential polluters. The E.P.A. could declare the entire area to be in “serious” noncompliance of the Clean Air Act early next year, with potentially huge economic implications, including a cutoff of federal transportation funds.

Many Alaskans rely on wood-burning stoves, which left-wing bureaucrats regard as offensive to environment.

Natural gas, a much cleaner fuel source, is not widely available in this part of Alaska, and heating oil can be very expensive. Oil also produces particulate pollution, though less than wood. A study for the borough last year said residents here spent, on average, almost four times the national average in annual heating costs.

Soon they may be paying fines on top of it — unless they opt to freeze.

A few weeks ago, it got down to −37°F in Fairbanks. The high for the day was −27°F. But never mind keeping warm. According to liberal theory, global warming will see to that. The important thing is to comply with the dictates of the regulatory bureaucracy. 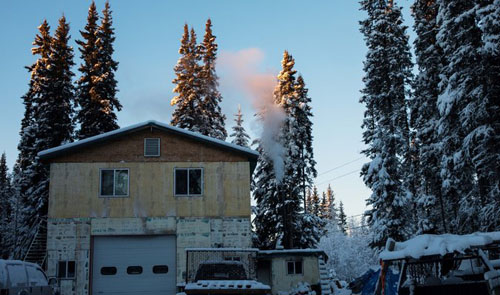 On tips from Steve A and Dan F. Cross-posted at Moonbattery.