I feel for these home owners – it’s devastating to lose your home like this. I saw many homes lost to fire in Northern Nevada and it was gut wrenching. Having said that, if you build a house near the coastline, this is the risk you take. It’s called weather. These storms are cyclable in nature and happen periodically. They are not a surprise and not unusual, regardless of all the hype you hear out there about Global Warming and rogue weather. This is tragic, but wholly normal.[1] 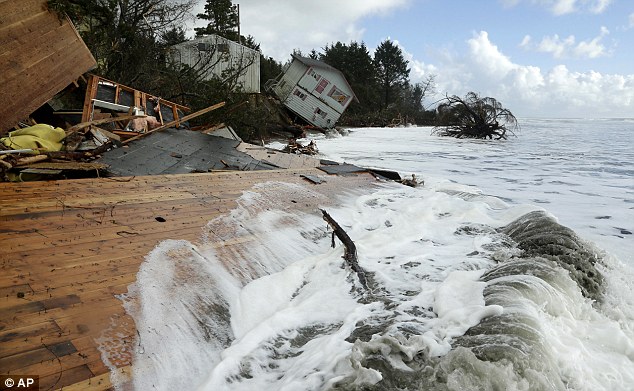 At risk: Hurricane force wind warnings have been posted for waters along the coast of northwest Oregon
and southwest Washington as the storm tears up the West Coast. Above, more damaged homes in North Cove.

This is the shocking moment a family’s Washington beachfront house toppled into the ocean during a violent storm that has caused many more homeowners to fear for their properties.

The white-and-red vacation home was captured on video sitting precariously on the edge of a grassy embankment after high winds, rain and rough seas eroded the coastline at North Cove.

Seconds later, it started to topple forward, before plummeting over the edge and into the ocean with a loud crash. As it fell, its chimney snapped, landing in the stormy water several meters away.

The property’s owners, who filmed the footage last Friday, were heard shrieking as their holiday home plunged into the ocean, finally coming to a rest in a wrecked state on its side.

Now, the family’s neighbors are scrambling to save what they can from their own properties before they also give way to the ferocious waves at what is dubbed ‘Washaway Beach’.

But some are already too late – with several more vacation homes in the area having already crumbled into the sea over the past few days. None were insured, Fox 40 News[3] reported

When the majority of the properties were purchased years ago, they were situated several blocks away from the sea. But as rain and winds have continued to hit the area, they have been put at risk.

The storm that is currently striking the Pacific Northwest stems from the weather system that last week dumped nearly 10 inches of rain in California’s Bay Area and three inches in Sacramento.

The system, fueled by a stream of tropical moisture called the ‘Pineapple Express’, resulted in severe flooding, landslides and widespread power outages when it hit San Francisco.

On Monday, the National Weather Service said the storm was ‘expected to be one of the strongest storms in terms of wind and rain intensity’ since incidents in October 2009 and January 2008.

Hurricane force wind warnings have been posted for waters along the coast of northwest Oregon and southwest Washington, according to Weather.com[4].

Dozens of flash flood warnings have also been issued across the West Coast.

And the storm is expected to only worsen – meaning even more North Cove homes are at risk of seeing their foundations slip away from underneath them.

When you live near the ocean, erosion is a major factor. None of these homes were insured. That’s just plain dumb. The coastline takes the brunt of heavy weather with no mountain ranges to disperse heavy storms. It’s like playing stormy roulette. When the ‘Pineapple Express’ hits, it brings much needed water. Alas, when it rains, it pours with this event. The forecasters warned of the system for days… plenty of time to prepare and get your items out. Just like there was all the time in the world to insure the property. A lot of these homes were merely cabins and trailers… easy targets for any storm. Someone should read about the Three Little Pigs and build accordingly here, far away from the shoreline.