Greenpeace is at it again, coming up with another ridiculous stunt to protest oil drilling. But this time, they didn’t get away with it, and they got slammed with a hefty fine for blocking an oil company’s ship. 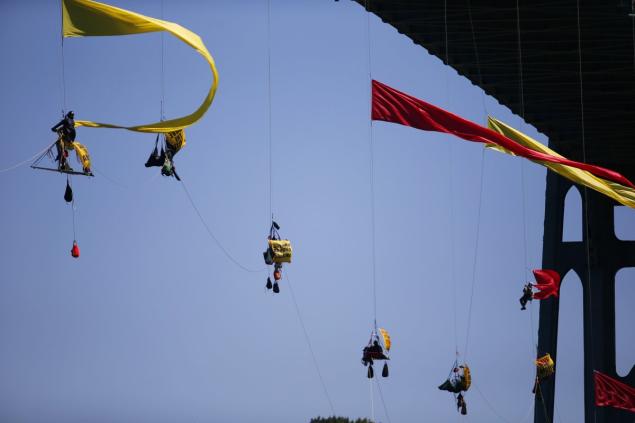 A judge ruled Greenpeace USA to be in contempt and issued sanctions of $2,500 an hour as the protest blocking a Shell ship continued.

Shell and Greenpeace USA appeared at an emergency hearing in federal court in Alaska on Thursday morning to determine if protesters dangling from a bridge in Portland violated a court injunction.

Attorneys for Shell filed an emergency motion claiming that Greenpeace should be fined for violating the court’s order.

Lawyers for Shell provided screenshots from Portland media showing the attempted departure of the Fennica from Portland on Thursday morning. Thirteen Greenpeace protesters were dangling from the St. Johns Bridge in an attempt to block the ship.

Greenpeace lawyers said the Fennica stopped short of the activists when it turned around and kayakers were also in the way.

Greenpeace said the kayakers in the river were not employees or directed by Greenpeace.

Shell lawyers argued Greenpeace knew about this protest because the environmental group send out a funding pitch to donors showing the protesters on the bridge. Shell claimed Greenpeace clearly violated the court’s injunction.

“We have consistently stated that we respect the right of individuals to protest our Arctic operations so long as they do so safely and within the boundaries of the law. The staging of protesters in Portland was not safe nor was it lawful. Furthermore, Greenpeace demonstrated a complete lack of regard for the authority of a U.S. Federal Court. We are pleased with today’s court ruling that holds Greenpeace in contempt and prescribes fines for further non-compliance.”

You know what’s awful interesting, is that these moron protesters were attempting to block the ship in kayaks made of plastic… which is made out of oil — not to mention that they had to drive to the protest site in cars that run on gas. These people are hypocrites of the worst kind, enjoying the many ways that oil has benefitted our society, and all the while remaining not only completely ungrateful, but also trying to block a company from drilling for more oil. You’d think they would be embarrassed.