The EPA Shrinks The Size of Wyoming by a Million Acres

Since when do the worthless bureaucrats in the EPA trump the state of Wyoming, Congress and a hundred years of history[1]? 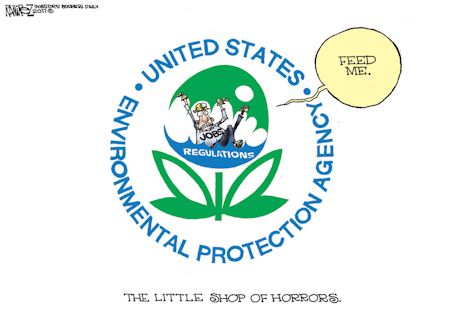 Why is the EPA altering state boundaries in Wyoming – and reversing over 100 years of established law? Well, apparently the city of Riverton now falls under the jurisdiction of the Wind River Indian Reservation. This, obviously, isn’t sitting well with the governor’s office – which is urging the EPA to reconsider its ruling and respect the rule of law.

Reacting to the decision to reduce the size of Wyoming by about a million acres, Wyoming Governor Matt Mead warned of the dangers to all Americans of this type of unilateral land redistribution by the EPA:

“I understand that the Northern Arapaho and Eastern Shoshone Tribes have a different opinion about the Wind River Reservation Boundary. My deep concern is about an administrative agency of the federal government altering a state’s boundary and going against over 100 years of history and law.

“This should be a concern to all citizens because, if the EPA can unilaterally take land away from a state, where will it stop?” Governor Matt Mead said in a press release on January 6.

Gov. Mead added, “The Attorney General’s petition shows that, in conjunction with the Tribes, Congress diminished the Wind River Reservation in 1905. Given the fundamentally flawed process and decision and the likelihood of irreparable harm, the EPA should put a hold on its decision and reopen its process to incorporate all of the available evidence, give interested parties an opportunity to respond to the facts and arguments and complete its review in a transparent manner. The State has also asked the EPA to stay its decision until a final judicial decision has been issued.

Well, if King Obama’s EPA wants to redraw the borders of Wyoming, I guess there’s nothing we can do since this is a monarchy…oh wait, this isn’t a monarchy, Obama isn’t king and the EPA doesn’t have the authority to redraw the lines of states. This is absolutely nuts and neither Congress, the courts, nor the people of Wyoming should stand for it.