America STANDS with France! Army takes the field flying the US & French flags in show of support

The Army’s football team[1] took the field flying the US and French flags in a strong and moving show of support for the French people after eight separate terrorist attacks were carried out by ISIS across Paris last night, killing 127 and wounding 350. I love our military! They stand solidly against the terrorists and with the French in their hour of need. As France mourns, Americans pray for her people and vow to go after the terrorists. Bless the Black Knights for honoring those who have fallen in Paris. America weeps with the French today, but we continue the fight. 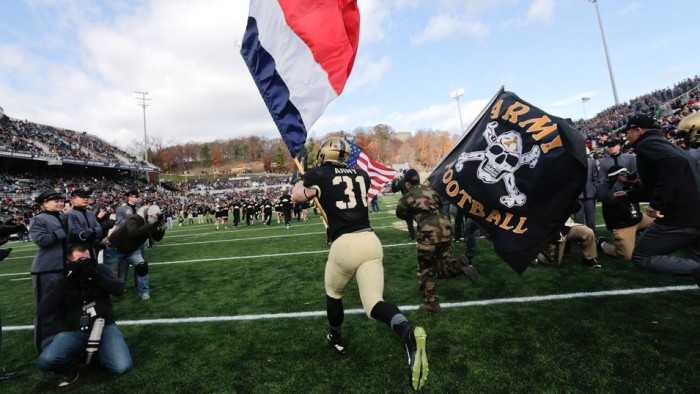 Army’s football team typically takes the field behind the American flag, a nod to the larger purpose of the U.S. Military Academy. But on Saturday, the Black Knights[3] made a moving addition.

As the Army players ran onto the Michie Stadium field prior to their home game against Tulane[4], they did so with the American flag carried at the front, as usual, but with the French flag carried immediately behind it.

It was a moving gesture of support for a country reeling from Friday’s terrorist attacks that saw more than 100 killed in the capital city of Paris and a state of emergency declared throughout the country.

Just awesome. As the Army’s Caleb McNeill carried the French flag onto the field Saturday at Michie Stadium, I found myself cheering and weeping. ISIS has declared war against all who stand against the Caliphate. They kill indiscriminately… men, women, children… they don’t care. If you are an infidel, you are a target. ISIS claims this is the ‘First in the Storm.’ I hope this wakes America and the world up and we decide to hunt them down with a vengeance and terminate each of them with extreme prejudice. No more coddling, no more tolerance, no more diplomacy. If you are a terrorist or even remotely connected to terrorists, we’ve got your death warrant right here and we can’t wait to serve it. Before this is done, ISIS will pay for every death and every vile act they have committed. For now, we honor France and her people. America stands with France.