When female leaders travel to Muslim countries, they are generally advised to wear headscarves to show “respect,” though we all know it’s so they don’t “tempt” men with… their hair?

When Marine Le Pen was told to wear a headscarf for her meeting with Lebanon’s Grand Mufti, she politely, but firmly declined. 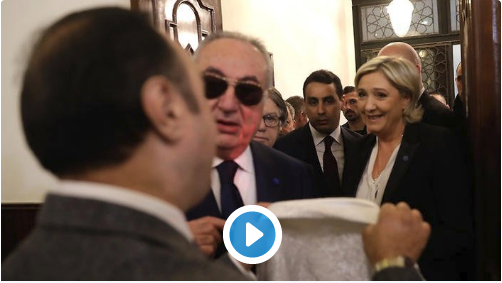 “Pass on my considerations, but I’m not wearing a veil.” Now that’s real female empowerment.

"It's a no": Marine Le Pen refused to wear a headscarf for a meeting with Lebanon's grand mufti https://t.co/f6ATRYTV3B[2] pic.twitter.com/lDcNOVL3A2[3]

Islam is a male-dominated religion and women are expected to follow a man’s demands, including dressing to their specifications. Le Pen wasn’t about to be told how to dress to meet with another leader.

Love this lady!! She fights for rights of French & French women.

So proud of Marine Le Pen. @MLP_officiel[8]. She understands the meaning of the headscarf as opression and wants to lift women up.

Hard to believe that American feminists think putting on cat hats and dressing like vaginas are on the same level as refusing to be oppressed by an entire religion.