Vacationing families in Spain recorded the moment that a boat full of “undocumented migrants” landed on the beach where they were sunbathing.

This is something that we have yet to see in America (and I live in an inland state so the odds that we are never going to see something like that are pretty good), but I can imagine that our reactions wouldn’t be to just sit there and watch them invade our land. I would hope that our men would go out there and wrangle them up, and make them wait for the authorities. 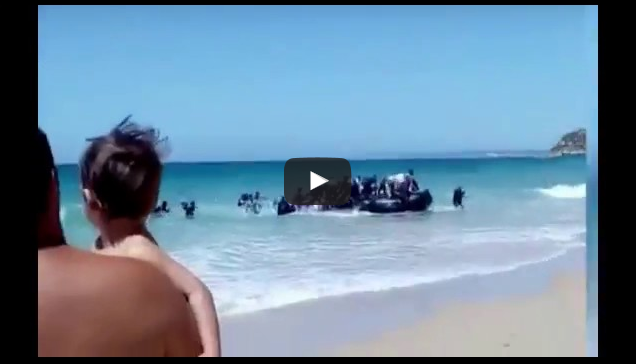 While at a beach in Cadiz, Spain, merrymakers were shocked to watch a boat dock on their beach, with the occupants running off to avoid the authorities.

The country has become increasingly popular among immigrants attempting to flee their homelands, as police are cracking down on other immigration routes around Europe.

The Central Mediterranean route from North Africa to Italy remains the current route of choice[3] in 2017.

However, Italian authorities are finally taking some action to turn back[4] migrant boats whilst they are still in Libyan waters — despite threats[5] from Libyan warlords — and beginning to tackle the so-called[6] rescue ships which have been helping people-smugglers[7] to ferry migrants into Sicily.

One Hungarian security chief estimates that 9,507 immigrants have entered into Spain within the first 6 months of 2017, which is a huge problem for a country that is not accustomed to having that number of people walk in unannounced at any given time.

Three Spanish border guards were injured when one thousand men with makeshift spears, knives and clubs flooded across the border. This came just one day after 300 men charged border agents, causing one to suffer a broken leg.

And yet, there’s still a crowd out there that doesn’t think that we need proper security on our borders. Insane.