In these days of diversity, this moonbat should have gone far in Germany’s domestic spy agency Federal Office for the Protection of the Constitution (Bundesamt für Verfassungsschutz [BfV]), being both a convert to Islam and a perverted degenerate:

Two weeks ago, German intelligence agents noticed an unusual user in a chat room known as a digital hideout for Islamic militants. The man claimed to be one of them — and said he was a German spy. He was offering to help Islamists infiltrate his agency’s defenses to stage a strike.

Agents lured him into a private chat, and he gave away so many details about the spy agency — and his own directives within it to thwart Islamists — that they quickly identified him, arresting the 51-year-old the next day. Only then would the extent of his double life become clear.

The German citizen of Spanish descent confessed to secretly converting to Islam in 2014. From there, his story took a stranger turn. Officials ran a check on the online alias he assumed in radical chat rooms. The married father of four had used it before — as recently as 2011 — as his stage name for acting in gay pornographic films. …

In April 2016, the man began working for the BfV, charged with monitoring potentially violent Islamists in Germany.

The unnamed spy was arrested for violating secrecy laws and preparing to commit a violent act. Hopefully this will not jeopardize his career at BfV. Now that his secret life is known, he can help the agency pursue diversity objectives. 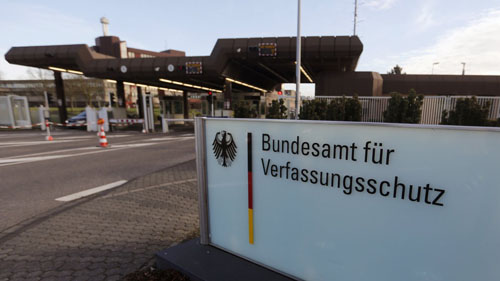 The spy agency should try gathering intelligence on job applicants.