The Grenfell Tower holocaust is a cautionary tale about the dangers of relying on Big Government to provide housing — and of moronic regulations inflicted in the name of the official state religion, Enviromoonbattery:

While it’s unknown what sparked the fire, experts say that the cladding, or exterior insulation, created a chimney effect through which the fire rapidly spread upwards. The cladding was added to Grenfell’s exterior in 2015 as part of a $12.8 million retrofit.

“I have never seen a fire that has engulfed an entire building like this in a career of more than 30 years,” Matt Wrack, who heads the Fire Brigades Union, told The Telegraph.

“It could be that this is the quest for sustainability trumping other concerns,” echoed Dr. Jim Glockling of the Fire Protection Association.

No worries; advocates of Big Government are always on hand to provide solutions to the problems caused by Big Government. These solutions invariably entail making the government larger and more powerful, and the people it rules smaller and more dependent. Riding high on recent election results, Jeremy Corbyn shouts that this failure of socialized housing can be addressed by confiscating private property:

Jeremy Corbyn has called for the empty homes of rich people in Kensington to be seized for Grenfell Tower residents who have been made homeless by the fire.

Barks the Marxist demagogue who leads the Labour Party:

“The ward where this fire took place is, I think, the poorest ward in the whole country and properties must be found – requisitioned if necessary – to make sure those residents do get re-housed locally.

“It can’t be acceptable that in London we have luxury buildings and luxury flats left empty as land banking for the future while the homeless and the poor look for somewhere to live.”

If Corbyn’s brand of Bolshevism isn’t kept in check, there will be no need to worry about speculators land banking for the future. Britain’s future will go up in flames as rapidly as Grenfell Tower once communists take control. 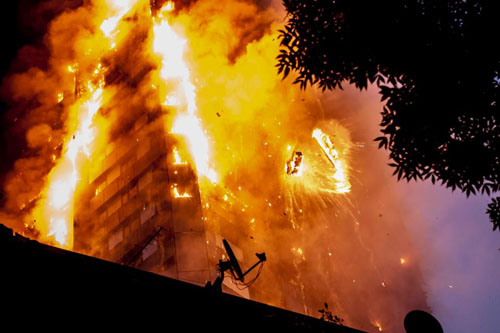 Grenfell Tower: a metaphor for Britain’s future under moonbat rule.

On tips from Bodhisattva, R F, and Torcer. Cross-posted at Moonbattery.