Defeating the Wehrmacht was hard enough. Rooting out the authoritarian mentality that gave birth to it does not seem possible. Possibly as part of its campaign to crush resistance to Islamization, Germany has declared war on social media:

Germany has passed a contentious law allowing fines of up to €50 million ($57 million) for social networks like Facebook and Twitter if they don’t pull hate speech down quickly enough. Called the Network Enforcement Act or “Facebook Law,” it was passed by Germany’s parliament on Friday, and will go into effect starting this October. …

Social networks could be fined for failing to remove material that his “clearly criminal” within 24 hours. Depending on how severe the content is deemed, that could rise to €50 million ($57 million).

If that sounds like anything short of tyranny, you might be thinking that German laws are reasonable. On the contrary,

Germany has some of the world’s toughest laws around defamation, hate crimes involving public incitement and threats of violence. That includes prison sentences for Holocaust denial and inciting hatred against minorities.

“Inciting hatred against minorities” can be stretched to cover any criticism of Islam, or resistance to the government’s policy of displacing the native population with vast numbers of unemployable welfare colonists from the Third World. 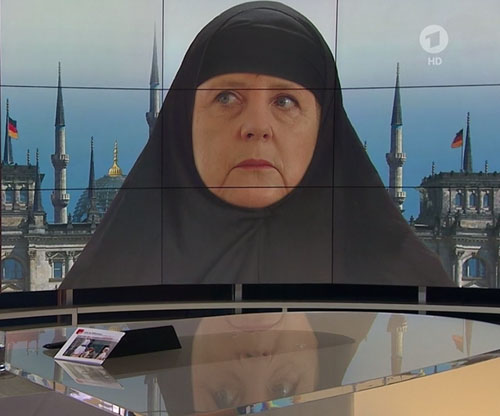 No one mistakes Merkel for Lady Liberty.