Poland Gives The EU The MIDDLE FINGER: ‘We Will NOT Be “Blackmailed” Into Taking Immigrants’ [VIDEO]

Polish Prime Minister Beata Szydlo[1] proclaimed in no uncertain terms after the Manchester terror attack last week that took 22 lives, among them children, that Poland will not be blackmailed (she probably meant extorted) into taking Islamic refugees who are unvetted and have terrorists among their numbers. Poland is a nation that has been overrun by Nazis and communists… so they know what they face. She was given a standing ovation by the Polish parliament and I don’t blame them. She is a magnificent and brave leader.

Poland has also produced some of the brightest minds on the planet and they are vowing to not bow to European elitist pressure. They would rather undergo sanctions. She called EU leaders weak-willed and accused them of living on their knees. The EU nations have thrown open their borders and have taken in millions of Muslim refugees that are destroying their nations financially, socially and culturally. Crime is off the charts and radical Islam is spreading throughout Europe. This woman is putting it to them bluntly in the face of suicidal political correctness. 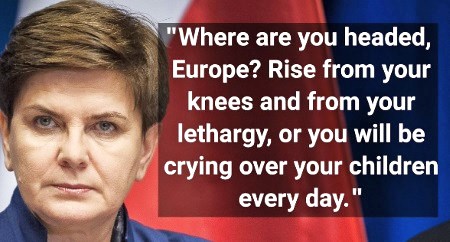 Polish prime minister Beata Szydlo said Poland will not be “blackmailed” into accepting thousands of refugees under the EU quota system, especially after the Manchester suicide bombing that killed 22 people, including two Poles.

Szydlo slammed weak-willed EU leaders for allowing the slow death of European culture and its people by taking in millions of refugees that are destroying the Western nations financially, socially and culturally.

In a defiant speech before the Polish Parliament on Wednesday, Szydlo urged lawmakers to protect Poland and its children from the scourges of Islamist terrorism and cultural suicide:

Where are you headed, Europe? Rise from your knees and from your lethargy, or you will be crying over your children every day.

If you cannot see that terrorism has the potential to hurt every country in Europe, and you think that Poland should not defend itself, you are going hand in hand with those who point this weapon against Europe, against all of us.

Do we want politicians who say we have to ‘get used to’ terrorist attacks?

Prime Minister Beata Szydlo received raucous applause from many members of the Polish parliament, who expressed their approval of her no-nonsense call to action.

Szydlo is rallying Poland to protect their country and children in the face of countries being conquered by Islamists. She is warning that if they do not fight back, many, many children will die on a daily basis and she is right. It’s what Islamists do. Szydlo’s government is currently battling the Brussels-based European Union over taking in a quota of refugees (mostly from Muslim nations in the Middle East and North Africa) after her predecessor in 2015 agreed to take 4,500 to 5,000 migrants. The EU has now raised their quota to 6,200 and Poland is saying no.

Instead, Poland is offering financial assistance to refugee camps in the Middle East. Hungary is doing the same thing. That is what they should do. Not let in a foreign invading force that brings violence and death with it. The EU says sanctions will be imposed on Poland if they do not accept the refugees by June, but Poland is saying they will not be blackmailed this way. Szydlo said she’d prefer any sanctions over taking in hordes of refugees, especially if they refuse to assimilate or pose a terrorist threat. “This needs to be said clearly and directly: This is an attack on Europe, on our culture, on our traditions,” she said. This is what a hero looks like and she’s Polish.

And the West continues to kowtow!

Hate your politicians, don't vote for them. pic.twitter.com/3911FEuQMO[6]