‘She was telling them she loved them until it went quiet’: A mother’s horror as she watched her two young sons die in a trailer fire after the deadbolt trapped them inside [Video]

This is a horrific tragedy. She managed to get her little girl out, but had to watch and talk to her two little boys as they died in a trailer fire. I can’t even imagine it. Heather Green stepped out to take a phone call for just a minute. Long enough for a little boy to play with a door and accidentally engage the deadbolt once it closed. Long enough, in that exact moment, for a space heater to catch the trailer on fire and seal their fates. The manager smashed a window to pull the little girl out. The little boys were not so fortunate.[1] 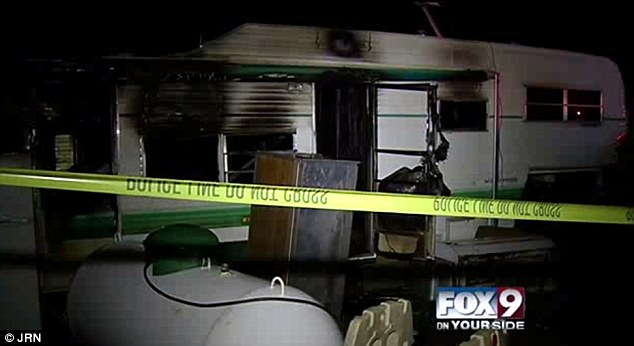 The children played in the High Desert RV park home as their mother was outside in a telephone call,
Twin Falls police have said.

A mother was forced to watch in horror as her two young sons died a in trailer fire as she desperately tried to break down the locked door.

The children were in the High Desert RV park home as their mother Heather Green was outside, police told the affiliate station.

Creekside Court RV Park manager Gina Johnson told Magic Valley[4] the mother-of-three told her she and a son clowned around before the fire, and moved trailer door back and forth to one another in a game – though it locked shut after she moved it in her son’s direction.

‘She was screaming for her daughter to unlock the door,’ Johnson said.

Gary Zimmers, the manager of the High Desert RV park, was injured after smashing a window in order to get Amiyah Green, the newspaper reported.

‘Any quick-thinking person would have done the same thing,’ he told the media outlet.

Johnson told The Times-News Heather Green’s hands suffered burns from trying to get the other children out.

Though the boys were stuck, Green ‘was standing by the window with her hand in there, telling them that she loved them,’ Johnson told the newspaper. ‘She made sure they heard it until she heard no more from them.’

The girl successfully got out of the trailer – though Kayden’s and Damion’s deaths were pronounced at a hospital after they were removed, KTVB reported.

A space heater next to items in the home caused the deadly incident, Twin Falls police told the affiliate station.

The girl was identified by The Times-News as Amiyah Green, the sister of the two boys who perished.

Gary Zimmers, the manager of the High Desert RV park, was injured after smashing a window in order to get Amiyah Green, the newspaper reported.

‘Any quick-thinking person would have done the same thing,’ he told the media outlet.

The mother burned her hands trying to get to her little boys, but the fire was too fast and too hot. All she could do was tell them how much she loved them before they died. I hate space heaters and this one must have been an older one, as the newer ones have a knock over setting that turns them off and a heat sensor in case they get too hot. The father of the children is in prison. Your life can change in an instant and those you have loved for so long and so much can be gone in the blink of an eye or in the time it takes for a phone call. My prayers are with the mom and her little girl — two little angels are gone too soon.