Kids using social media inappropriately is nothing new, and all too often, parents swear despite all evidence to the contrary that their little angel would never do anything wrong. Not this mother, though — she called her daughter out in an online video after finding out she had been posting pictures online in her bra and claiming to be 19. 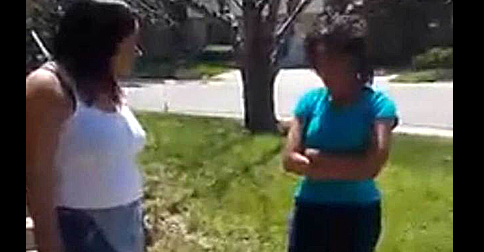 A Denver mother has received nationwide attention for shaming her daughter in an online video after discovering she had posted racy photos online and pretended to be 19-years-old.

“You’re 13,” Valerie Stark told her daughter in a Facebook video. “So why does your Facebook page say that your 19? Are you 19?”

“No,” replied the girl, who had her face blurred out in the video.

“You’ve got a Facebook page and you’re on there with your bra on, right?” Starks asked the girl. “Is that what you do?”

“Don’t cry now. You wasn’t crying when you was posting pictures on Facebook, was you? In a bra? Some little girl in some lace panties that you know you don’t own. You still wear panties that say Monday, Tuesday, Wednesday,” she said.

“She watches Disney Channel,” the mom added. “She has a bed time. She doesn’t sit around in a bra. She doesn’t own any lace panties and she doesn’t know how to wipe her butt good at 13. But you’re on Facebook in a bra.”

… Starks told KMGH-TV her child has had previous problems with the social platform.

“She’s had issues with Facebook in the past, at least four times in the past,” Starks said. “She spent half of last summer on punishment after being on Facebook, and it wasn’t even half as bad.”

While it’s good that this mother isn’t taking her daughter’s misbehavior lying down, there would have been an easy solution to this entire problem: get rid of her Facebook page and take away her access to a computer. This video will haunt her daughter for the rest of her life though, and does she really want to brand her as the skanky girl who stripped on the internet?