Feminists are taking their trigger warnings out of the classroom and bringing them to America’s favorite sport. Now even baseball isn’t safe from the screaming banshees on the left.

Dr. Cynthia Enloe is a women’s studies professor (imagine my shock) who is protesting “militarized, masculinity-heroism patriotism” by refusing to honor veterans at sports events. No, I’m not kidding.

Stop laughing, this is serious. These people breathe our oxygen, vote in our elections and contaminate our gene pool with their offspring. And apparently, they’re educating our youth. 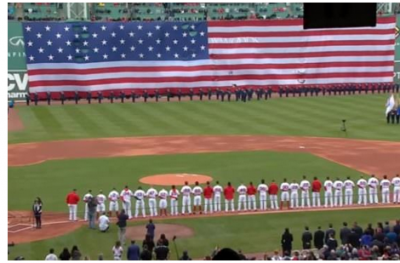 Enloe penned an essay[2] about her discomfort at a recent baseball game, where she cringed as the American flag was unfurled, refused to applaud a US veteran and did not stand for a rendition of America the Beautiful.

Why? Because she believes there are such things as “militarized, masculinity-heroism patriotism.”

Those are all English words, I get that, but strung together in that way and used as insults, I don’t honestly believe even she knows what she’s talking about.

“Patriotism, especially militarized, masculinity-heroicizing patriotism, is escalating at American sporting events. It may be most prominent at NFL games and NASCAR races, but it is in full bloom at most major league baseball games—not just the national anthem, but also the ubiquitous lauding of military personnel, and additional patriotic songs in the middle of the game.”

You’re welcome. You’re welcome for his service, so that you can live safely in a country that allows you to deny patriotism without fear of death. Try that kind of crap in North Korea and you’d be beheaded faster than you can say “patriarchy.” You’re welcome for our Founding Fathers who gave you a country in which you can express these anti-American sentiments.

The fact that she is installed in any sort of college and calling herself an educator is an example of the sad state of affairs in the American higher education system.