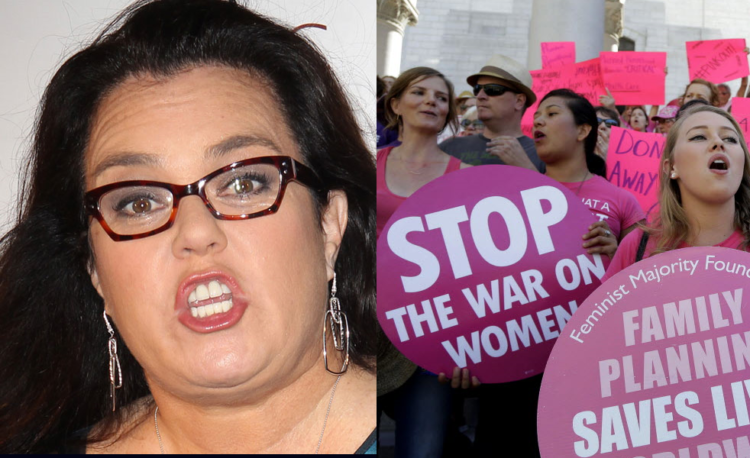 Rosie O’Donnell could just retire with a yacht on a private island, but her hate for Trump keeps her entertaining the rest of us every single day. The newest joke?

Posted yesterday: “WOMEN SHOULD FORM OUR OWN PARTY IF DEMS DO THIS”

WOMEN SHOULD FORM OUR OWN PARTY IF DEMS DO THIS #dontYOUdare[2] https://t.co/wxYyEaGn3V[3]

The first reaction if you’re right wing is to go right ahead! Split up the Democrats and start your own pink wing, so you can fight among yourselves while the rest of us take care of things! The first reaction if you’re left wing is — what about transgender people who identify as women, or genderless non-binary demi-women? The two-spirited queer womyn demand representation too!

When asked about Senator Kamala Harris, a possible choice for the Dem’s 2020 presidential run, Rosie attacked her for not being pro-choice enough. Rosie demands only the most hardened baby killers.

As reported in Breitbart:

The move comes as the party is struggling to win elections and is seeking to appeal to mainstream Americans[9] and thereby take back control of Congress in 2018.

“As we look at candidates across the country, you need to make sure you have candidates that fit the district, that can win in these districts across America,” Luján said, according to The Hill.

Rosie’s brilliance continued, as she complained about men taking away the rights of women (not the rights of the babies who are being murdered, obviously).

fight the men who want to take away womens rights IN OUR OWN PARTY? fuck them for even considering it – seriously – #IStandWithPP[10] https://t.co/xCW6WTTID7[11]

Recently, the Democratic National Committee’s Chairman Tom Perez said that pro-lifers are not welcome in his party.

“Every Democrat, like every American, should support a woman’s right to make her own choices about her body and her health. [Abortion rights are] not negotiable and should not change city by city or state by state.”

We can make jokes about state-enforced abortions, but leave the Democrats in charge long enough and you know we’ll end up with abortion panels, just as surely as the media laughed at Palin’s death panels.

The more split up and angry the Democrats are with each other, the better, because it keeps giving the GOP a better chance in November of clearing even more of them out of the House.