Woman Who Peed On U.S. Flag To Celebrate 4th Of July, Gets Bounty Put On Her Head 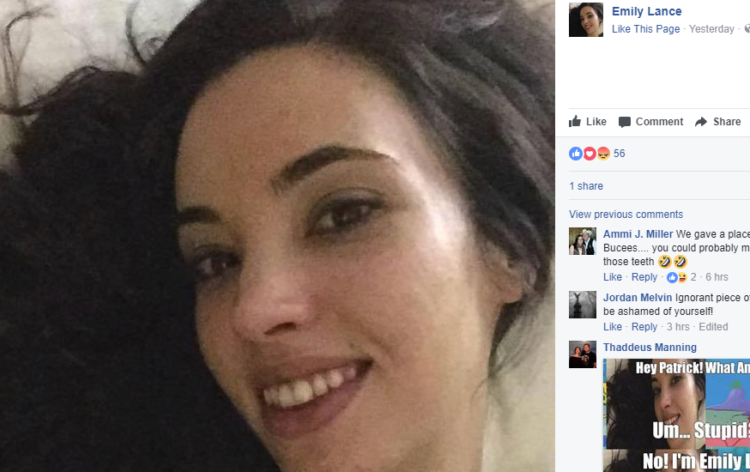 Recently, a Philadephia woman posted a video of herself on social media in what appeared to be an attempt to be an edgy liberal, but all she did was give us in the right wing sphere an excuse to use the joke that she pissed off a lot of people.

On July 4th, Emily Lance posted a video (below) that showed her using a device that allows women to urinate while standing up to relieve herself on the American flag. The flag is draped over a toilet as she braces herself over it, with the confusing background track of Bob Seger’s Night Moves playing in the bathroom. Someone is holding the phone to record the incident and Emily’s face is only visible in profile.

I’ve watched this video maybe 10 times now and will never get that time back. It’s been a long time since Internet videos bothered me, but this woman is clearly insane.

Here it is[2], being shared by the political commentator Michael Moates. I’m not going to post it here because I’d rather not force you to quickly close your browser if you’re in public.

#EmilyLance[3] So many people dream of living in the USA and here is what she does with her freedom.

Spoiled b*itch Emily Lance pees on the American flag + every soldier who fought and died for it. What a liberal POShttps://t.co/nRrkiUwAG5[5]

Strange how some get crazy abt a Confederate flag flying yet #EmilyLance[3] can pee on our flag w/no legal consequences https://t.co/bZP6YXef5H[8]

If you want to browse around to gaze at what life must be like for discombobulated liberals still in the night sweats of disbelief that Trump really truly won, take a look at her Facebook page[10].

When Emily originally posted the video, her charming caption noted:

And now there’s even an online bounty for her head for such a disgraceful act, which according to the Daily Caller was posted on Craigslist with a reward of $3,000. You can read more about the bounty and backlash from Terez Owens here[11], if you don’t mind a language and visual warning.

Everyone else is happy with hot dogs and fireworks, but nope! Liberals are too busy peeing on the flag to have fun.