FIGHT VIDEO: Big Girl Tosses Around Two Girls Like Rag Dolls After They Try To Jump Her

I have seen a lot of crazy stuff in my life, but this is easily in the top ten.

A very large woman was videoed throwing around a couple of girls (allegedly her friends) who tried to jump her. I mean literally THROWING them around. By their hair. Like they were sacks of potatoes. It’s one of those morbidly interesting things you can’t look away from. Like car wrecks. 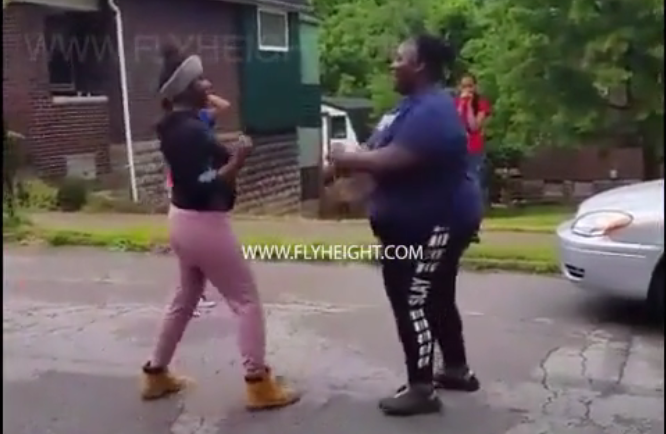 So, the video starts out with a girl in pink pants walking up to the bigger girl, who immediately picks her up and violently throws her down onto her back. (Remember when I said that these girls were “allegedly” her friends? I did that because I don’t know of anyone who loves their friend so much they’re willing to get body slammed by them for the sake of a video.)

Right after that, a girl in a blue shirt and pink shorts jumped in, only to be drug around by her hair like a rag doll. When the girl in pink pants tried to get back in the fight, she received similar treatment.

Moral of the story, I suppose, is don’t screw with this girl because she’s like a mountain and can drag you around by any extremity you might present to her.

What I want to know is, if these girls are her friends, why did they allow her to do this to them? I mean, what is the point of this video? Was it supposed to go viral and make them all famous (or infamous, as the case may be) and they’d make money on it? I simply don’t understand, but perhaps that’s because I’d never do something like this. Still thought, you have to admit that it was pretty fun to watch, even if it did make me wince a few times.