FIGHT VIDEO: This may be the best kick you’ve seen since 300 and “This is Sparta!”

Listen up, I don’t care if this video is staged or not, this is absolutely beautiful. There are few things in life more satisfying than watching someone get knocked on their backsides by a well-executed kick, especially if there is a running start involved.

And if you’re wondering, yes, this is my way of taking a break from the news of the day because I hate the fact that everything is about Trump and his stupid tweets.

Also, this is a metaphor for how Trump is handling the media. 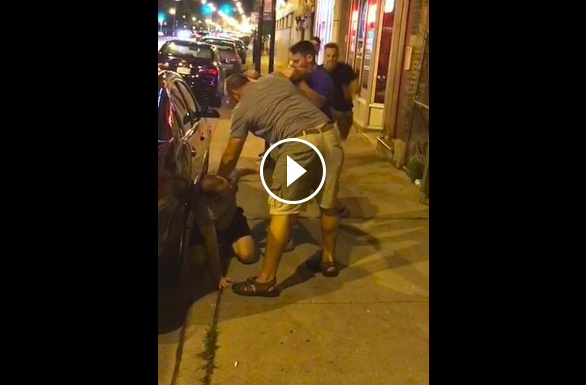 At the beginning of the video, you can see some men assaulting another man on the ground next to a parked car.

From the background you can see two men running up to the pair. From out of nowhere, the guy in the white shirt unleashes a flying kick that knocks over the guys like brainless bowling pins.

I’m also going to put a language warning on this because there is a moment where someone curses, but really, is that so shocking in a video where people are receiving flying kicks to the head? Point is, if that kind of language offends you, you might as well turn it off right now.

I have to say, That looks extremely painful and like something that I never wish to endure. While I’m still not entirely sure what is going on in the video, or what provoked such an extreme reaction out of the men who were running, I can safely say that I’d rather avoid doing that.

Also, quick question, why do men record things like this? I don’t understand their fascination with taping beatings and other fights. I guess it’s because we enjoy them so much. They’re totally my guilty pleasure. Don’t tell anyone.