Three Dead After Massive Fight, Where it Happened Will Shock You [VIDEO]

When I was in high school in Bozeman, Montana[1], a bunch of us would sneak into the cemetery at night to party and well… that’s another story. We sure as heck didn’t go there to shoot at each other and fight. Evidently that’s what they do in Russia, only in broad daylight. Three people are dead and 30 are wounded after a massive fight between two rival groups of gravediggers there. At least four are in critical condition. Over 100 were arrested. Who knew gravedigging was so competitive and tribal? You can hear shots and there was a lot of brawling. The fight was over who would get to do the burial services for the largest cemetery in Europe located there. It’s over 500 acres. Wow… watch it guys, you are beginning to look like a union. 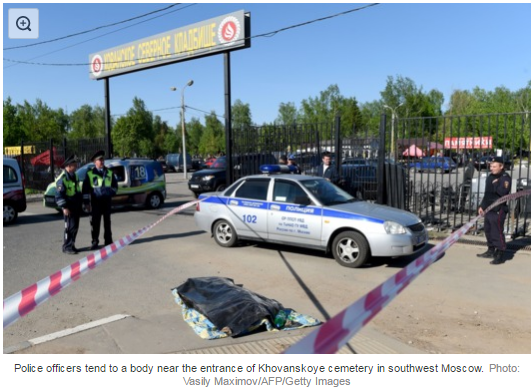 As many as three people are dead, 25 wounded, and 50 arrested after two rival groups of gravediggers got into a massive brawl in a Moscow cemetery on Saturday, according to Russian news agencies TASS[3] andRussia Today[4]. The fight was apparently over which group would control lucrative burial services in southwest Moscow’s Khovanskoye cemetery, which at 500 acres is the largest cemetery in Europe. Before the melee was broken up by police, participants fought each other using shovels, bricks, baseball bats, and even non-lethal handguns. RT reports that as many as 400 people participated in the brawl, though other news organizations like the BBC[5] have put the number at around 200, and said the number killed was only two. The cemetery workers were also apparently from rival ethnic groups from ex-Soviet Central Asia and the Caucasus, according to Russian media reports.

These guys went at each other with guns, baseball bats, bricks, shovels and anything they could grab. As many as 400 people participated. They take their gravedigging there very, very seriously. And I know you will be shocked, but there were rival ethnic groups. The media labeled them ex-Soviet Central Asia and the Caucasus. Think white Russians and Muslims. The National Guard was deployed. I didn’t even know they had a National Guard. The cemetery is in Moscow. Police and National Guard forces were deployed to deal with the fight at the Khovanskoye cemetery on the southwestern outskirts of Moscow on Saturday. None of those who were involved in the armed conflict are official cemetery employees, RIA Novosti reported citing Moscow police. Most of them are foreign nationals, who are in Russia illegally, officials said. A group of people, reportedly natives of the North Caucasus, arrived at the cemetery in 15 cars, according to Interfax. They were met by migrants who worked there – privately hired by families of deceased people. The migrants were armed with shovels and crowbars. When the invaders realized they were outnumbered, they attempted to flee, shooting from car windows. The migrants then blocked off roads and the fight began. As three suspects tried to flee the scene in a car, they reportedly ran over and killed two people. The suspected attackers were heavily armed and wore bulletproof vests, according to TASS citing a law enforcement source. The attack had been “planned long ago,” a cemetery employee told RIA Novosti, adding that the invaders “entered from all sides and beat everyone up and shot at cars, right in front of the clients.” Among the brawlers were people from the Central Asian former Soviet Republics of Tajikistan and Uzbekistan, who were allegedly attacked by citizens of Chechnya and Dagestan from the North Caucasus. The latter wanted to chase the former from the territory and set up their own businesses providing services for the cemetery. It reportedly yields a substantial income. “They came and told us, ‘You’d be working for us’. You’ll give us the whole sum, and we’ll give you back 10 percent. We didn’t agree, so they arrived, all armed, about 100 people, and shot people dead, just for that money,” one of the injured told LifeNews. Just insanely violent.