Thug Intended Victim Down the Street to Start a Fight… GETS A NASTY SURPRISE! [VIDEO]

Once again[1], we see what happens to a bully when he underestimates his intended victim. In the Netherlands, several boys were walking down a street. A blonde thug starts walking by a somewhat bigger target. Suddenly, the bully kicks him in the shin. The non-victim proceeded to turn around and clock this guy with a left hook. The sound it made was memorable. The bully went down hard. His buddies started going after the victim, but backed off because they were worried about their friend. One punch landed just right can kill someone. The thug is okay this time. I doubt he learned a damn thing though.

There are bullies and thugs like this all across the planet. They are scum that want to make themselves feel better than others and who have a poor self-image of themselves. But before a pack of cretins like this select their next target, they might want to make sure the person they are zeroing in on is actually a victim and not a fighter. This pack of thugs misjudged their prey. 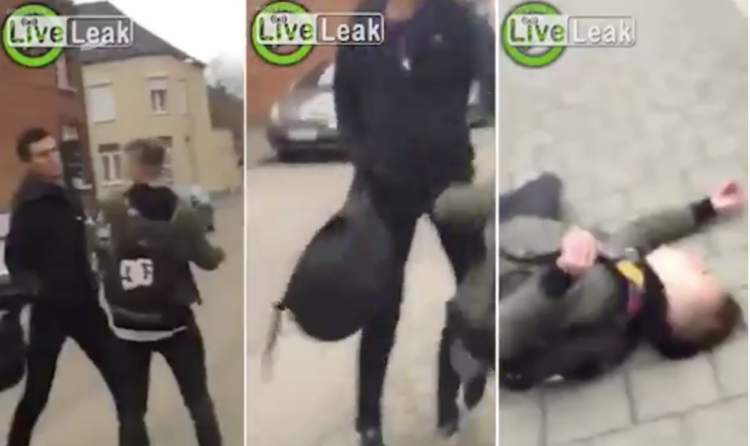 This is certainly one way of dealing with a bully.

Footage has emerged of a bully being floored with a single left hook, which makes a sickening crack when it connects with his face.

A group of boys, believed to be from the Netherlands, are seen walking down the street talking to one another.

At the head of the pack, a boy dressed in a green jacket can be seen antagonising one of his peers.

The bully shoves his intended victim, and gets no response – but when he swipes a kick at his legs, suddenly the other boy snaps.

At first he makes a half-hearted swing that only prompts laughter from the group, but as the bully drops his guard he delivers a second blow to his jaw, which knocks him out cold with a disgusting popping sound.

He lies motionless on the ground as the group stand over him with their mobile phones, while one of his friends can be seen trying to fight the boy who has just sent him to the pavement.

Eventually the intended victim slips away as concern growns for the boy, who is still on the ground and seems extremely groggy as he sits up.

Even this idiot’s friends laughed at him when he came to. I think he got what little brains he has scrambled a bit with that punch. Good. His buds ruthlessly made fun of him and his lame fighting skills that he displayed when going after his intended victim. He literally got owned on this and it was an epic embarrassment.

One person commented, “You nicely heard the sound of his next dental bill.” Another added: “One of life’s finest pleasures is to see a bully’s control over a situation suddenly reversed.” And that is exactly what happened here. I love happy endings.