If you suffer from an uncontrollable road rage – learn to control it. It would be wise if you didn’t do what these two idiots did during a traffic altercation. The truth is you never know who is in the other car and you never know if it might be your last day of freedom before you head to jail, or your last day on earth. So, please don’t be an idiot and just drive on. 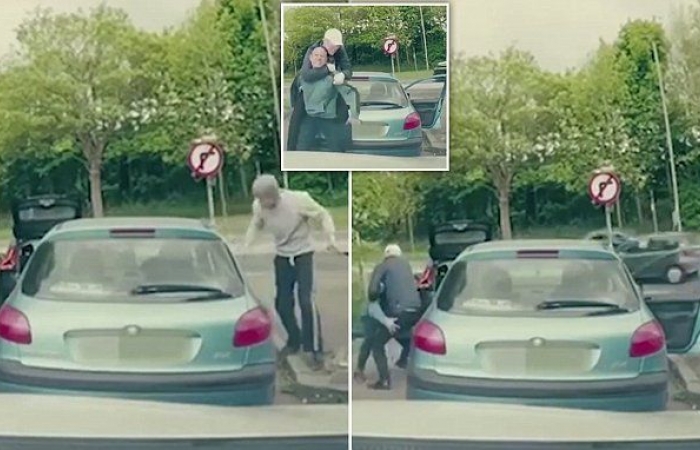 Now, from what we see in this insane dash cam footage, is two very unlucky guys biting off more than they could chew after going up against one man who proved to be just too much for them. What is especially sad is that one of the two that instigated the fight even had a baseball bat that he swung around and yet…

Still no match for the mystery man with the street fighting hands.

If you watch the video, you’ll see that it all happened when one idiot jumps out of his car to grab a bat out of his trunk. He then walks around to the car behind them and threatens the man. All would have been fine and dandy if the guy with the bat had just walked away right after that – but nope.

He struts away, then turns and swings at the car, smashing it. This will prove to be the biggest mistake of the week for him, no doubt.

The mystery man hops out of his car and pursues the man who just busted his vehicle. As he gets close, he dodges a swing from the bat-wielding idiot, then with the speed of a boxer, sends a hook right to the idiot’s chin which knocks him out flat and into the bushes!

By this time, the other idiot in the car was out and attempted to tackle and slam the boxer against the car three times. Stupid move. It didn’t take the man long to flip this other idiot down on the ground, to which he fell and wrestled off of camera for a bit. A couple of seconds pass and we see the boxer taking this other idiot in a choke hold! Like he’s some kind of rag doll!

The man can’t take the pressure against his neck and soon collapses right there on the ground. The man promptly gets to his feet and started heading back to his car in victory. Unfortunately for him, two nosy idiots that were filming the whole thing were trying to intervene by calling the police and getting the man’s license plate number.

Ladies? Mind your own business and just be on your way. There was a problem and the guy solved it. Done deal.