And the Most Popular “Food” Among Food Stamp Recipients Is…

Considering that food stamps (a.k.a. EBT cards) are presumably a last ditch measure to prevent starvation, what do you suppose is the most popular commodity among those who use them? Milk would be a good guess, because it helps underprivileged children to grow up healthy and strong so that they can earn their own way through life. Just kidding. Actually, a better guess would be soda pop, which rots the teeth, contributes heavily to obesity, and has virtually no nutritional value:

That is according to a new study released by the Food and Nutrition Service, the federal agency responsible for running the Supplemental Nutrition Assistance Program (SNAP), commonly known as the food stamp program.

Guess who is buying milk?

By contrast, milk was the top commodity bought from the same retailer by customers not on food stamps.

In calendar year 2011, according to the study, food stamp recipients spent approximately $357,700,000 buying soft drinks from an enterprise the study reveals only as “a leading U.S. grocery retailer.”

Soda isn’t the only favorite of subsidized shoppers that is more indulgence than sustenance.

The study accounted for “candy-checklane” as a different commodity than “candy-packaged.” “Candy-checklane” was ranked No. 57 ($37,900,000 in purchases) …

When combined, “candy-packaged” and “candy-checklane” accounted for $134,100,000 in purchases made by food stamp recipients at this “leading U.S. grocery retailer.”

The study said it may not have captured all of the food purchases made by food stamp recipients in the grocery retailer from which the data was collected because a person was identified and monitored as a food stamp recipient only after they paid for the majority of a purchase with an EBT card.

Meanwhile, the national debt is closing in on $20 trillion and is not looking back. This story is emblematic of what we let Big Government spend our future on. 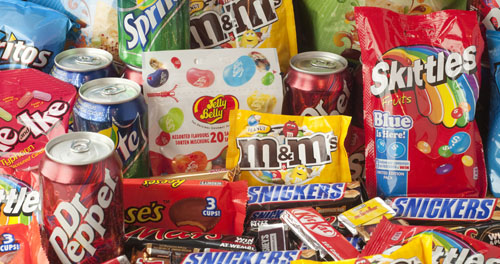 On a tip from JusttheTipHQ. Cross-posted at Moonbattery.