Allen West Goes on Epic Rant Against Obama; Calls Him an “Abject Failure” 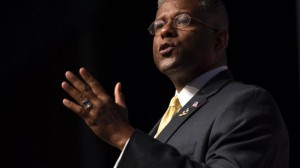 Retired Army Lieutenant Colonel Allen West is: a vocal opponent of: President Barack Obama and has been particularly critical of his foreign policy. Reacting to news of the massacre of 90 Iraqis by ISIS, Lt.: West took to Facebook in an epic rant where he: accused: Obama of: being “an inhumane coward” and “an abject failure.” 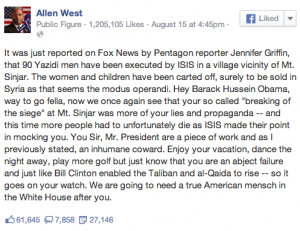 West’s frustration with Obama’s handling of this situation comes after the president recently claimed that the siege of Mr. Sinjar had been broken and that American operations against the ISIS terrorist group: had been a success. That has clearly not been the case with more than 90 men executed and reports of women and children being forced into slavery.