Former CIA Director David Petraeus testified Friday that “Al Qaeda involvement” references were removed from the CIA’s original talking points, which had indicated that the CIA knew immediately that an Al Qaeda linked group was responsible for the 9/11 attack on the U.S. Consulate in Benghazi, Libya, which led to the brutal murder of four Americans, including Ambassador Chris Stevens. 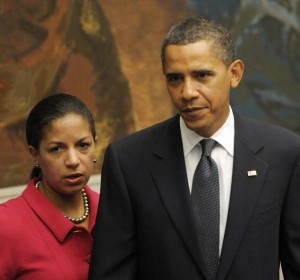 [1]Mysteriously, those talking points were removed from the talking points used by UN Ambassador Susan Rice when she appeared on five Sunday morning talk shows.:  Rice used the same talking points that somehow happened to have been spoken verbatim by White House Press Secretary Jay Carney, U.S. Secretary of State Hillary Clinton and Barack Obama himself.

They were used multiple times…for weeks leading up to the U.S. election.

Equally inconvenient for the White House’s crumbling foreign policy narrative is the revelation that Jill Kelly, the “Tampa Bay socialite” whose complaints about email harassment facilitated the demise of Petraeus, just happens to have dined at the White House three times this year.

Meanwhile, Israel is mobilizing masses of tanks and tens of thousands of reservists in response to Hamas launching missiles oh so conveniently located next to mosques and playgrounds into Israeli cities, including Tel Aviv and Jerusalem.

Egypt, whose rapidly fraying peace treaty with Israel is all but a thing of the past, is sending its Prime Minister to visit Gaza in support of Hamas.

Since objecting to the policies and/or behavior of any “progressive” is instantly trumpeted as “sexist”, “racist” or whatever pejorative is most convenient for members of the institutionalized “progressive” left, such declarations should be summarily ignored.:  One can only cry “wolf” for so long before they can expect to be dismissed.:  Criticizing Rice has been declared “sexist” and “racist”.:  Logically, going after Obama will only be deemed “racist.”

In their ongoing efforts to uncover the ugly truth, Senate and House investigators should go after Obama.:  After all, in Thursday’s press conference he asked for it.