The Radisson Blu Hotel[1] in Mali’s capital was just stormed by at least 10 radical Islamists shouting “Allahu Akbar!” Gunmen drove vehicles onto the premises with diplomatic plates and they spoke English. The Macina Liberation Front, a wing of Boko Haram is taking credit for the attack. They took 170 hostages and at least 3 are dead now. Malian security forces and US Special Forces are freeing hostages as I write this. 80 hostages have been freed so far. There were Americans in the hotel. Two Malians and one French national have been killed while two workers for Turkish Airlines and six Chinese nationals are thought to be among the hostages. The hotel confirmed[2] that 125 guests and 13 employees remain trapped inside the building. The US embassy in Bamako has urged embassy staff to seek cover from the attack, tweeting that all Americans in Mali should ‘shelter in place’. 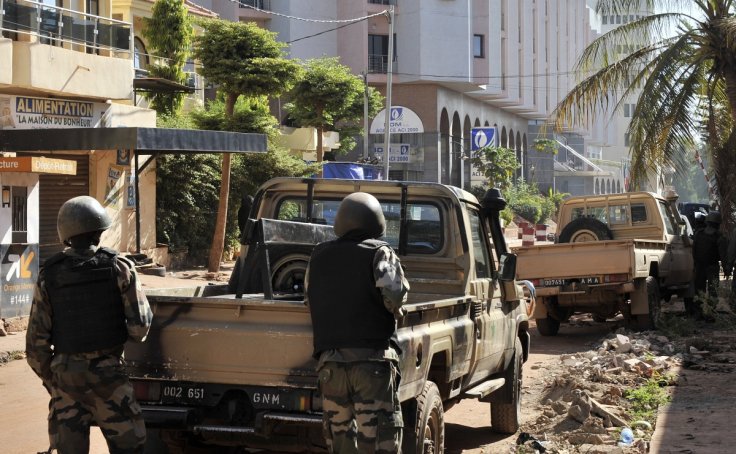 Another terrorist attack has struck a world city, one week after the jihadist atrocities in Paris that killed 129 people.

The city of Bamako, Mali, was the scene for the latest terror attack. Gunmen drove vehicles with diplomatic plates onto the property of the Radisson Blu Hotel, a hotel that is known for its popularity with foreign tourists, and spoke English as they entered the hotel.

Guinean singer Sekouba ‘Bambino’ Diabate, who was freed by Malian security forces, told The Daily Mail what he had heard:

I wasn’t able to see them because in these kinds of situations it’s hard. I woke up with the sounds of gunshots and for me, it was just small bandits who came in the hotel to claim something. After 20 or 30 minutes, I realized these are not just petty criminals.”

After going floor to floor through the hotel brandishing AK-47s, they took 170 hostages. According to reports, those who were able to recite portions of the Koran were allowed to leave. 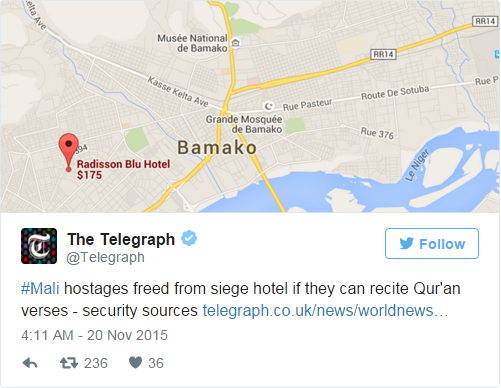 Editor’s note: This is breaking news. The post will be updated as more information is forthcoming.

Breaking reports indicate that there are Americans inside the hotel. It is unknown just how many Americans are being held.

Three citizens thus far are confirmed dead, according to Fox News, one being a Mali citizen. There is continuing gunfire in the ongoing siege.

Fox News has also reported that some of the terrorists were heard speaking English. The terrorist group’s identity is currently unknown.

Malian Special Forces have been seen outside the hotel and are assessing the situation while France’s national security service have confirmed that about 40 members of the French National Gendarmerie Intervention Group are en route to Bamako. A spokesman for the service said they are heading to the hotel from two different units of special police forces trained for emergency situations. British Special Forces are in Mali and also expected to head towards Bamako to help with the terror operation. Word has it the terrorists were asking people if they could repeat verses from the Quran… if they could they were freed. If not, they were held. This comes as 132 are dead in Paris and threats are being made by ISIS against DC and New York. The world is in chaos as ISIS steps up their attacks and this is just the ‘Front of the Storm.’ They are also readying chemical weapons attacks. So much for being contained.