This was the wrong turn from hell.[1] I always joke that I am directionally challenged, but I’ve got nothing on these guys. Be very careful which Korea you land in… one is good, one is very, very bad. A delegation of corporate sponsors and hospitality providers for next year’s Winter Olympics landed in Pyongyang, North Korea instead of the intended destination which was PyeongChang, South Korea. Oops. As they landed, they were instantly surrounded by commie NoKo police/military, who really don’t have a sense of humor. Not good.

Anyone reminded of Gilligan’s Island here? A simple five-day tour starting in Tokyo ended up in the Hermit Kingdom. That’s not a place anyone sane would ever want to visit. The wrong city was entered into the flight plan as they left Beijing, China. They were allowed to land, but going to Pyongyang is sort of a Hotel California moment without the sexiness. You can enter anytime, but you can never leave. “We stopped on the tarmac, and the pilot announced the error. We were petrified about what might happen,” one passenger explained in the aftermath, “He told us to stay seated, stay calm. A cabin steward popped the door open and we could see armed men in uniform facing the plane.” Stay calm? All the Xanax in the world wouldn’t do the trick.

When it comes to arranging flights for the 2018 Winter Olympics, be sure to choose your Korea carefully.

A delegation of corporate sponsors and hospitality providers for next year’s Winter Olympics took an unexpected and terrifying journey into North Korea this week as the pilot of a chartered corporate plane accidentally charted a flight path 250 miles off course, reports[3] Around the Rings. The pilot confused PyeongChang, South Korea, the host of the 2018 Winter Olympics, with Pyongyang, the capital of North Korea.

The passengers were on a tour of Asian Olympic host cities that began in Tokyo five days earlier.

The intended destination was Yangyang Airport in the South, but the plane ended up at Pyongyang International Airport. The pilot incorrectly entered the flight plan before the plane left Beijing, China.

North Korean air traffic control allowed the Gulfstream to land, but as the aircraft touched down, it was instantly surrounded by North Korean security vehicles with flashing lights.

An ominous and official-looking black car rolled up to the plane. Two military officers accompanied by riflemen emerged. With the help of a translator, the pilot apologized profusely. I’ll bet he did. The passengers were forced to disembark and their passports and luggage were inspected by North Korean security. I’ll bet a number of things went missing after that inspection. After finding several boxes of Olympic pins, the North Koreans determined that the flight to Pyongyang was an accident. The passengers and crew were allowed to return to the plane and after 15 minutes, they were cleared to leave North Korea. Again, I’m wondering if a bribe was given.

“The pilot was given an all clear to depart and the cabin filled with clapping as we cleared the runway,” an unidentified passenger told reporters. The plane landed in South Korea 45 minutes after takeoff. And I bet as those passengers left that plane they had to fight a severe urge to kiss the ground and a number of them probably needed clean underwear. There have been multiple instances of confusion over the two city names and they say this was bound to happen sooner or later. I opt for it better not ever happen again. 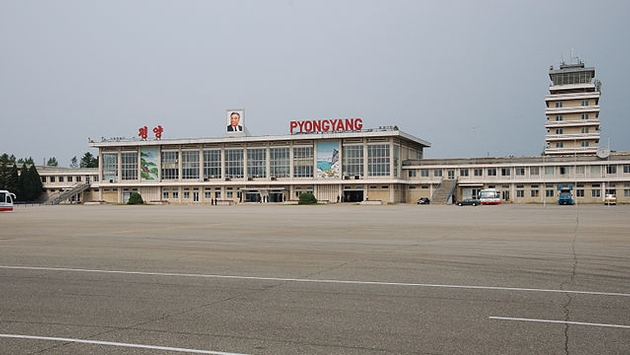