I’ve seen this before.[1] Whenever there is a terrorist attack and people die, the Black Lives Matter crowd gets all upset because people are grieving over the dead and not paying attention to them. It’s the ultimate in narcissistic selfishness and it borders on sociopathic. Now BLM activists are claiming that the terrorist attack in France that has killed 84, including 10 children, was meant to take attention from their cause. They claim people are focusing too much on white lives and not enough on BLM. Seriously? You people are just downright evil. 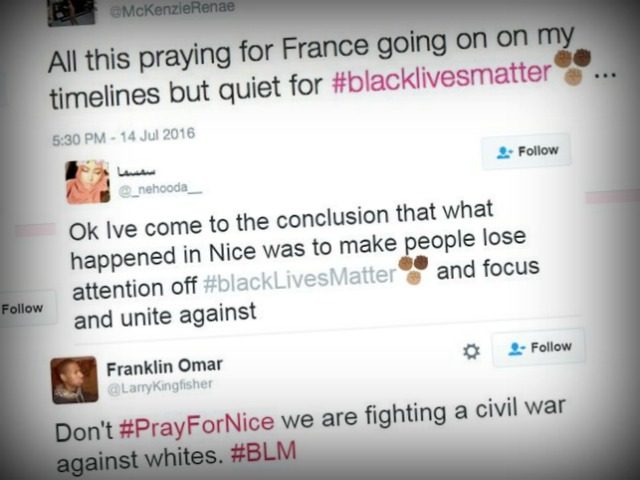 Black Lives Matter (BLM) supporters have claimed the deadly terrorist attack[3] in France was “to make people lose attention” [sic] in their movement and focus on “white” lives instead.

“Ok I’ve come to the conclusion that what happened in Nice was to make people lose attention off [sic] #BlackLivesMatter and focus and unite against us”, wrote Twitter user Semsa, who is based in London but says “Egypt’s the motherland”. She has since made her account private.

“Don’t #PrayForNice we are fighting a civil war against whites. #BLM”, tweeted[4] Franklin Omar, an activist who also appears to be from London, and describes himself as a “Muslim”.

Some of these activists for BLM seem to be in London. One specifically is Muslim and the other claims they are in a war with whites. Nice. “I’m seeing all this ignorant hate for Muslims. THESE PEOPLE AREN’T MUSLIM. #PrayForNice #Nice #NotAllMuslims”, wrote Mr. Omar later. Adding: “Your women are ours now. Allah (pbuh) has promised them to us. Piss off white crusader, watch as Rome burns”, and, “lol we’ve already won Europe, USA can’t do anything against the caliphate white pussy, USA men cant fuck, good luck.” “It’s sad to see all these people saying Pray for Nice, France but you guys can’t even say Black Lives Matter”, tweeted California-based model and BLM supporter Klarivel Garcia. “As sad as it is to hear about France I’m even more sad [sic] that now the media will push #BlackLivesMatter even further back in the que [sic]”, wrote a Los Angeles-based BLM activist. “Lol why did these haters tweet me about my #BlackLivesMatter comment. Guess what #BlackLivesMatter #BlackLivesMatter #BlackLivesMatter”, she added after other users criticized the comment. Today was the Day of Rage sponsored by Anonymous and BLM. Anyone with any soul at all would have postponed that, but not these guys. They want to get their violence on and have war and anarchy in the streets. They may very well get their wish unfortunately. 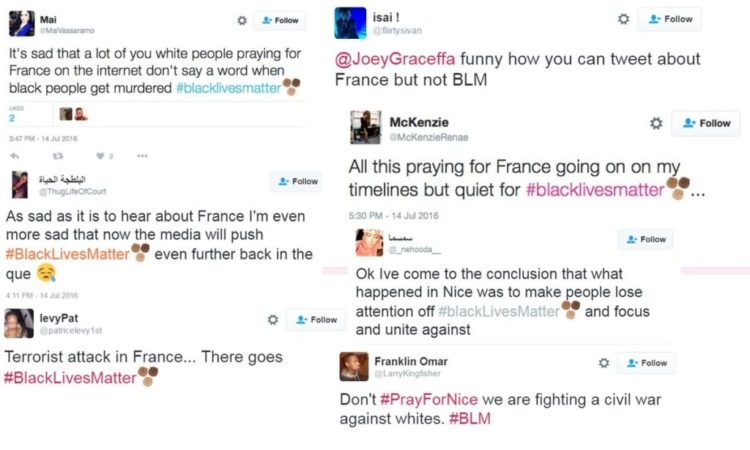