A second tragedy has befell France today.[1] A high-speed train that was being tested on the border of Germany and France caught fire, split in two and derailed, killing at least 10 and injuring 32; 12 seriously. 5 people are still unaccounted for. They are claiming there is no connection to terrorism. If not, this is horrific timing. After derailing, the train plunged into a canal and divers are currently searching for the 5 missing people. Most of the injured have been airlifted to hospitals. The train was on a test-run with only railroad employees on board. Just awful. 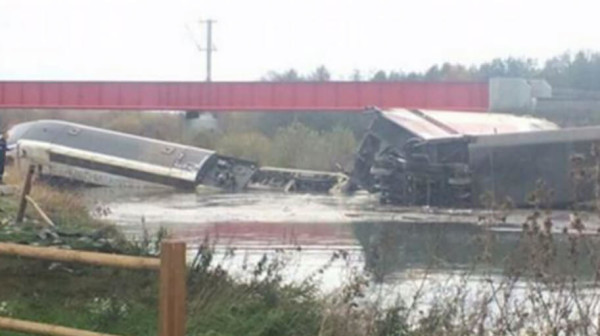 As the French nation reeled from a terrorist attack in Paris that claimed more than 125 lives and France was in the throes of its highest terror alert, a new disaster took place Saturday.

A high-speed train caught fire and then left the track during a test run in northeast France. The train was carrying 49 people. All those aboard the train were employees of national railway operator SNCF.

At least 10 people have been killed. About 32 people were injured, 12 of them seriously. Many of those injured were seriously hurt and were airlifted to local hospitals. French environment minister Ségolène Royal[3] said five were unaccounted for. Divers were searching the canal where the train landed in hopes of finding survivors.

The train burst into flames, split apart and plunged into the Marne au Rhin canal at in the town of Eckwerscheim, near Strasbourg.

Many of the train cars landed in the water of a roughly 130-foot wide canal. A police team of divers, helicopters and rescue vehicles were at the scene. Aerial footage showed cars strewn on either side of the tracks.

Officials said there is no apparent link between Saturday’s train accident and Friday’s terrorist attack in Paris.

They think the train was going too fast and skipped off its tracks. There are conflicting reports on whether it crashed into a bridge before catching fire or not. The train looked like a badly cared for toy lying in the water, except of course for the very real dead bodies. The train line opens in 2016 and this looks like an accident. Terrorists would have gone for a packed train, which this wasn’t. Regardless, it is a second day of mourning for a country that is still reeling from yesterday’s horrific events. More prayers are going to the French – I hope that there are no more tragedies lying in wait.