Marine Le Pen May Soon Be a Political Prisoner

Marine Le Pen is expected to do well in France’s upcoming presidential election. Europe’s left-wing establishment is so terrified that it has dropped the nicey-nice mask it hides behind to reveal the naked tyranny beneath:

The 48-year-old leader of the far-right Front National (FN) now faces being summoned by a French judge, and being charged with ‘distributing violent images’.

Her supposed crime consists of exercising her fundamental right of free speech in a political context regarding the menace posed by Islam.

Le Pen posted the three pictures in December 2015 during a Twitter spat with a journalist who compared the FN to jihadi terrorists.

One was a picture of journalist James Foley, who was beheaded on behalf of Allah.

Other images showed a man on fire in a cage, and another being run over by a tank.

As a Member of the European Parliament, Le Pen is afforded some of the basic rights free people take for granted. But not for long.

Members of the EU’s legal affairs committee voted to lift Le Pen’s immunity earlier in the week, and the decision has now been ratified by the full parliament.

This isn’t the first time the Powers That Be have attempted to criminalize her point of view.

Ms Le Pen last lost her EU privilege against prosecution in 2013, after she compared Muslims praying in the street because they had no mosques to occupying Nazis.

She was accused of ‘incitement to discrimination over people’s religious beliefs’, but was cleared after a trial in 2015.

This did not prevent her from continuing to rise in popularity. 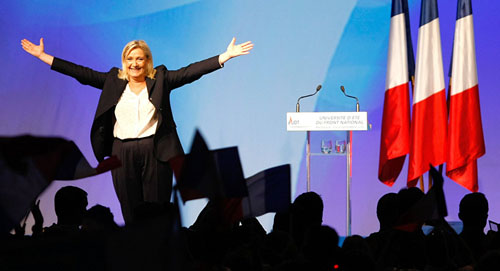 They are desperate to stop her.

On tips from Saxon Warrior and Dragon’s Lair. Cross-posted at Moonbattery.