The de Blasio administration is trying to limit the number of food trucks in the city by claiming that each hot-dog and kabob cart causes more pollution than a truck ride to Los Angeles.

Deputy Health Commissioner Corinne Schiff made the claim at a City Council hearing Wednesday, in an apparent effort to sink a bill that would nearly double the number of food-vendor permits in the city by 2023.

“Meat grilling is a significant source of air pollution in the city,” Schiff said. “One additional vendor grilling meat emits an amount of particle pollution in one day equivalent to what a diesel truck emits driving 3,500 miles.”

The new bill would boost the number of permits to 8,000 by 2023 and also create an enforcement team to sniff out violations.

Since 1983, the number of street-food vending permits has remained steady at 4,235. But there are likely more carts than that on the streets, as some vendors simply open shop without a license and work until they are caught.

Some need to break the law to make an honest living under Big Government run amok.

Only a lunatic or a cretin could possibly believe that food carts make it be too hot out. As in all matters big or small, the only real reason for tyranny is tyranny. 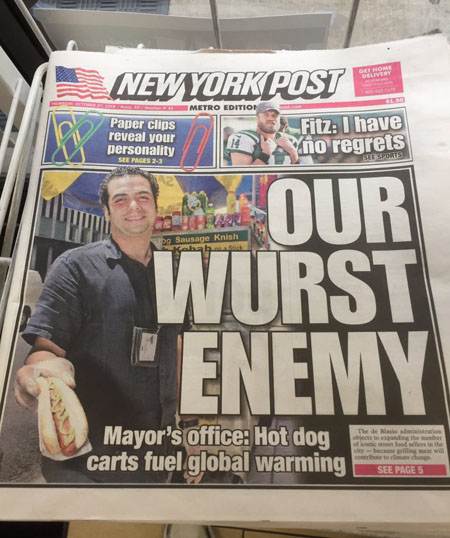 On a tip from Stormfax. Hat tip: Weasel Zippers. Cross-posted at Moonbattery.