Whether you agree with rancher Cliven Bundy’s decision to allow his cattle to feed on federal lands without permission or not, the thuggish, heavy handed response of the Bureau of land Management should disturb you.If the government feels comfortable threatening a rancher in Nevada, it feels comfortable threatening the rest of us, too. That’s why the Bureau of Land Management should be pulling out[1]. 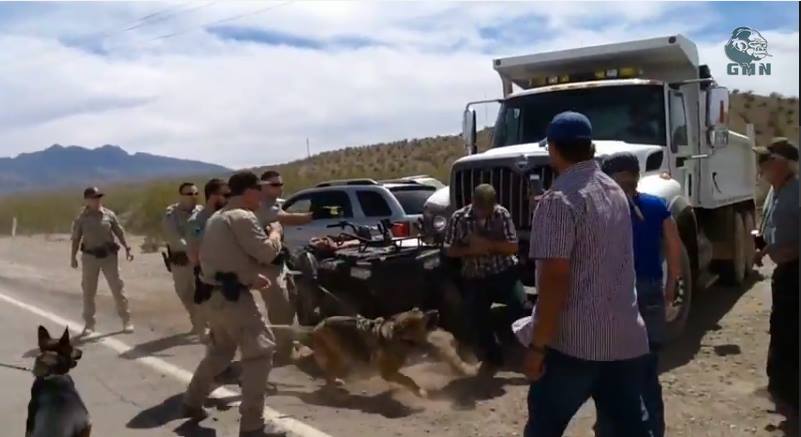 A Nevada cattle rancher appears to have won his week-long battle with the federal government over a controversial cattle roundup that had led to the arrest of several protesters.

Cliven Bundy went head to head with the Bureau of Land Management over the removal of hundreds of his cattle from federal land, where the government said they were grazing illegally.

Bundy claims his herd of roughly 900 cattle have grazed on the land along the riverbed near Bunkerville, 80 miles northeast of Las Vegas, since 1870 and threatened a “range war” against the BLM on the Bundy Ranch website after one of his sons was arrested while protesting the removal of the cattle.

“I have no contract with the United States government,” Bundy said. “I was paying grazing fees for management and that’s what BLM was supposed to be, land managers and they were managing my ranch out of business, so I refused to pay.”

The federal government had countered that Bundy “owes the American people in excess of $1 million ” in unpaid grazing fees and “refuses to abide by the law of land, despite many opportunities over the last 20 years to do so.”

However, today the BLM said it would not enforce a court order to remove the cattle and was pulling out of the area.

“Based on information about conditions on the ground, and in consultation with law enforcement, we have made a decision to conclude the cattle gather because of our serious concern about the safety of employees and members of the public,” BLM Director Neil Kornze said.

“We ask that all parties in the area remain peaceful and law-abiding as the Bureau of Land Management and National Park Service work to end the operation in an orderly manner,” he said.

What probably happened was that someone on the scene at the BLM sent written communication saying that someone could be hurt. Because it was in writing, the BLM decided to pull out. Unfortunately, because these government thugs ended up with egg on their face, they’ll be twice as determined to destroy Cliven Bundy now. My guess is that they’ll probably try to do it legally. Next thing you know, he’ll be faced with a dozen charges that could put him in prison, millions in fines — and they’ll do everything possible to destroy his business. It’s not as showy, but it’s just as tyrannical because it means there are always some weasels in D.C. who can ruin you any time they take a notion.

If that does happen, Republicans in Congress should retaliate against the BLM thugs and bring them to heel. At a minimum, I’d like to see Darrell Issa investigate whether the BLM was too heavy handed in its tactics. Of course, that would take a measure of courage, which is something that seems to be in short supply of late if Ted Cruz, Mike Lee, Rand Paul, Jeff Sessions, Trey Gowdy and a few other good men aren’t leading the fight.