Update: See video of protesters heated battle with police, below:

A long-simmering dispute between a: Nevada cattle rancher: and the federalBureau of Land Management: has reached a boiling point, and participants have their fingers crossed it won’t erupt into violence. 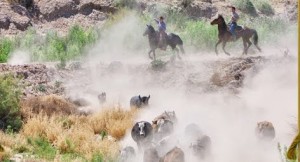 Since 1993, Cliven Bundy has been battling the agency, as well as the National Park Service, the Center for Biological Diversity and the courts, to graze his cattle on 150 square miles of Gold Butte scrub land in the Lake Mead National Recreation Area. He stopped paying his grazing fees back then, saying he “fired” the Bureau of Land Management as land manager. His Mormon ancestors had tilled the unforgiving soil since 1887, long before the 1934 Taylor Grazing Act allowed the federal government to seize control,: TheBlaze: reported.

“I have raised cattle on that land, which is public land for the people of Clark County, all my life. Why I raise cattle there and why I can raise cattle there is because I have preemptive rights,” he asserted, explaining to TheBlaze that this includes the right to forage, too.

Furthermore, Bundy has argued that it is the United States trespassing on Clark County, Nev., land, not he, and that he is a better steward of the land. He points out that the manure from his cows fertilizes the soil, that he’s built water sources for wildlife, and that his cattle prevent the vegetation from growing overly dense and creating a fire hazard.

“It’s high time for the BLM to do its job and give the [endangered desert] tortoises and the Gold Butte area the protection they need and are legally entitled to,” senior Center for Biological Diversity scientist Rob Mrowka told theMesquite Local News. “As the tortoises emerge from their winter sleep, they are finding their much-needed food consumed by cattle.”

The Bureau of Land Management website says Bundy has defied trespass laws for more than two decades, ignored rules and fees that other cattle ranchers have observed and refused “repeated attempts to resolve the matter administratively and judicially,” according to TheBlaze. While Bundy stated that he owed the BLM $300,000 in back grazing fees, spokeswoman Kirsten Cannon put the figure closer to $1.1 million.

Plus, the roundup of the approximately 900 unwelcome cattle could cost as much as $3 million. But the 68-year-old Bundy has remained unintimidated.

The Bureau of Land Management “has overstepped its boundaries by not letting me access my rights,” he said, and contended that it had inserted “200 armed officers watching our every move and stealing our cattle.” Bundy’s wife, Carol, said snipers are patrolling the family’s ranch.

Spokeswoman Cannon responded that “There are law enforcement and other personnel in place as needed to ensure that the BLM and National Park Service’s employees and contractors are able to conduct operations safely.”

Bundy has vowed to do whatever it takes to protect his property, and his 14 children and hundreds of supporters stand behind him.: Dave Bundy, his son, was arrested on Sunday afternoon while attempting to film the contract cowboys at work, and cited for failing to disperse and resisting arrest.

Thus far, 234 cows have been impounded as the Bureau of Land Management has temporarily closed the public recreation area. Bundy’s plea to the Clark County Sheriff to intervene was stymied as the action fell under federal jurisdiction.

While the last rancher in southern Nevada argues “it’s a freedom issue,” federal officials are executing the “no trespassing” court mandate.

Nevada Gov. Brian Sandoval: weighed in with a statement Tuesday scolding the Bureau of Land Management:

“Due to the roundup by the BLM, my office has received numerous complaints of BLM misconduct, road closures and other disturbances. I have recently met with state legislators, county officials and concerned citizens to listen to their concerns. I have expressed those concerns directly to the BLM,” Sandoval said.

“Most disturbing to me is the BLM’s establishment of a ‘First Amendment Area’ that tramples upon Nevadans’ fundamental rights under the U.S. Constitution. To that end, I have advised the BLM that such conduct is offensive to me and countless others and that the ‘First Amendment Area’ should be dismantled immediately. No cow justifies the atmosphere of intimidation which currently exists nor the limitation of constitutional rights that are sacred to all Nevadans. The BLM needs to reconsider its approach to this matter and act accordingly.”

Whether violence and bloodshed can be avoided remains to be seen.

Video of protesters run-in with police posted on You Tube ( strong language):