Just a day in the life of someone trying to run a business under the heel of authoritarian moonbats:

As patrons munched on Shepherd’s Pie inside East Nashville’s Family Wash restaurant last Friday, an entourage of a dozen law enforcement officials unexpectedly entered around 10 p.m. in a way the owner alleges resembled a raid.

The group — comprised of two Metro Police officers, as well as Metro Codes, ABC beer board, health department and fire marshal officials — is called Metro’s Environmental Task Force. Its function is to ensure restaurants and bars are following alcohol, food, health and other codes.

There was a time when “Environmental Task Force” wouldn’t have sounded terrifying. That time has passed.

[Owner Jamie Rubin] said the group’s attire made it appear like everyone was a cop. As they arrived, he said they provided no paperwork, identification, business cards or notification. Officers went through coolers behind the bar, he said, and aggressively asked questions to his staff.

The storm troopers questioned Rubin’s use of his wine license, but had to admit that it was legit, and that the establishment passed health inspection.

As officials remained at Family Wash for an hour, every customer left, he said. A band quit playing after three songs. He estimated he lost $800 to $1,000 in sales…

Not to worry; if we continue down our Hopey Changey path toward ever bigger government, customers will soon be accustomed to this sort of thing. 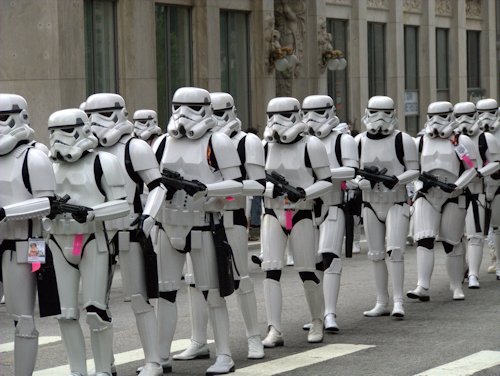 On a tip from Wingmann. Cross-posted at Moonbattery.