An absurd and alarming notion has become prevalent among militant campus snowflakes that would spell an end to freedom of speech if widely implemented. They say that being exposed to thoughts they don’t like is equivalent to physical violence. Of course, most thoughts are offensive to someone, so this only applies to thoughts deemed offensive to those at the top of the P.C. caste system, i.e., those known in leftist theology as the “marginalized”: blacks, Muslims, illegal aliens, sexual deviants — in short, anyone cultural Marxists can play off against the core population. This notion of speech as violence is now going mainstream — if the “Paper of Record” can still be regarded as mainstream. This was actually published in the New York Times:

Physical violence is physically damaging; verbal statements aren’t. “Sticks and stones can break my bones, but words will never hurt me.”

But scientifically speaking, it’s not that simple. Words can have a powerful effect on your nervous system. Certain types of adversity, even those involving no physical contact, can make you sick, alter your brain — even kill neurons — and shorten your life.

Your body’s immune system includes little proteins called proinflammatory cytokines that cause inflammation when you’re physically injured. Under certain conditions, however, these cytokines themselves can cause physical illness. What are those conditions? One of them is chronic stress.

Your body also contains little packets of genetic material that sit on the ends of your chromosomes. They’re called telomeres. Each time your cells divide, their telomeres get a little shorter, and when they become too short, you die. This is normal aging. But guess what else shrinks your telomeres? Chronic stress.

If words can cause stress, and if prolonged stress can cause physical harm, then it seems that speech — at least certain types of speech — can be a form of violence.

Science has spoken. Lo and behold, science turns out to be a militant moonbat that doesn’t like free speech.

Moronic to the point of self-parody? Sure, but also alarming.

Democrats will find themselves back in power before long, possibly in a big way due to Trump’s increasing unpopularity and the uselessness of the Republicans in Congress. When they do, do not expect them even to pay lip service to freedom of speech. Free speech is violence, after all. 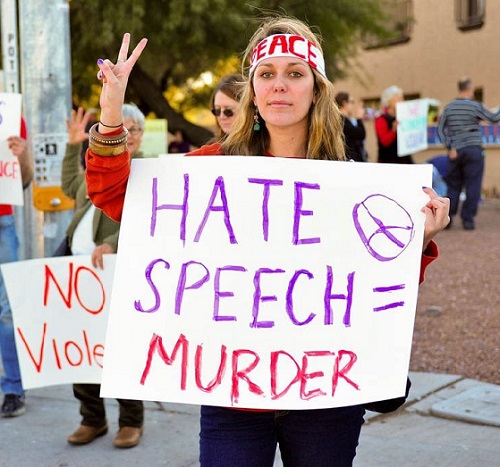 Will soon have the whip hand.

On a tip from Torcer. Cross-posted at Moonbattery[1].