Per the 4th Amendment,

The right of the people to be secure in their persons, houses, papers, and effects, against unreasonable searches and seizures, shall not be violated, and no Warrants shall issue, but upon probable cause, supported by Oath or affirmation, and particularly describing the place to be searched, and the persons or things to be seized.[1] 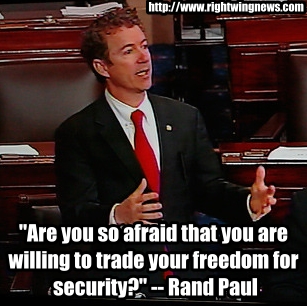 The NSA is violating the Constitution by compiling the private phone records of Americans not accused of a crime. Rand Paul is standing up and saying that’s unacceptable.

WASHINGTON, D.C. – Sen. Rand Paul held a press conference today to announce his intent to pursue legal action against the National Security Agency’s vast overreach of power as it relates to telecommunication privacy and government surveillance. Various legal options are currently being explored and legal action will be announced in the next few weeks.

“The fourth amendment states clearly that warrants must be specific to the person and the place. A court order that allows the government to obtain a billion records a day and does not name an individual target is clearly beyond the scope of the fourth amendment. So far we have over 250,000 people who have signed up to challenge the constitutionality of the generalized warrants. If anyone with a cellphone wants to be part of the lawsuit they should go to RandPac.com” Sen. Paul said.

Even if the Obama Administration were trustworthy, which it’s not, the government still couldn’t search your phone records because it’s unconstitutional. If Congress won’t do the right thing and demand an end to this, then maybe the Supreme Court will. Either way, this spying on the American people has to end.