One of the worst things about the Internet is that a lot of people don’t get sarcasm or irony and as fans of Rush Limbaugh know, he drops both like anvils out of a helicopter. So, did Rush Limbaugh say that gay marriage, “is now inevitable?”

Yes, but what did he actually mean? For that, you have to read between the lines. 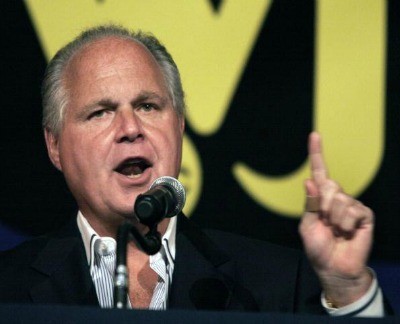 The Republican Party is not really fighting much of anything budget-wise. So my conclusion that gay marriage is inevitable was simply in recognition of what The Politico story said, that the Republican Party wishes it would go away. By that, they mean the Supreme Court issue a sweeping ruling legalizing it in all 50 states. If the primary source of pushback isn’t going to push back, I’m sorry, it’s inevitable. That element of what I said was left out of every report on this.

What’s fascinating, folks, is that every report treats my proclamation as though it comes from on high. “Rush Limbaugh said gay marriage is inevitable! That means it’s inevitable,” just because I said it.

Here’s the translation of that statement for those who don’t speak “El Rushbo.”

We are losing on gay marriage and we are losing because the cowardly, gutless, country club Republicans in DC believe the only way to win is to give up on our principles. They don’t have any heart, they don’t fight, they just give in — and even if you’re talking about God’s definition of marriage in a nation that’s more than 70% Christian, you can’t win if you won’t fight.

Republicans can’t win on gay marriage, illegal immigration, spending, pro-life issues, 2nd Amendment issues or on the budget unless they’re willing to stand up for what they claim to believe in. Until Republicans figure out that you don’t win battles on defense, we’re destined to lose every fight with the Democrats, including the conflict over gay marriage.