Get The Government Out Of Marriage

The United States Supreme Court is hearing oral arguments in a suit over California’s Prop 8, which amended the state’s constitution to define marriage as being between one man and one woman.:  The LGBT lobby has been fighting Prop 8 tooth and nail since even before the bill was up for a vote, and the latest court ruling, which came from the 9th Circuit Court of Appeals, overturned the amendment.:  Despite anything written in the U.S. Constitution, there really is no telling how the Supreme Court will come down in this case, at this point in time.:  But the larger question is, should the government be involved in marriage at all anymore?

The entire point of involving the government in marriage was to encourage people to engage in an institution that acts as a stabilizing factor in civilized society.:  The nuclear family: one man and one woman with their children, has long been shown to bring stability to society that aids in prosperity and the health of society as a whole.:  The traditional nuclear family, when undertaken by responsible people, is the most stable way to perpetuate society.:  This is an important factor: government endorsement of marriage has never been about “love;” it has always been about the stabilizing influence that successful marriages have on society.

But our modern society has degraded the definition of marriage to the point where it is almost meaningless today.:  The prevalence of no-fault divorce has led to more and more marriages being dissolved — marriage is hard work, and there are too many people in our modern society who are more than willing to take the easy way out for marriage to play the same stabilizing role that it once played.:  It doesn’t help that the government has further degraded marriage as a stabilizing institution in society by subsidizing single motherhood and fatherless families through government welfare programs.:  But that being said, I am a believer in traditional marriage, which is why I would rather see the government get out of the marriage business altogether. 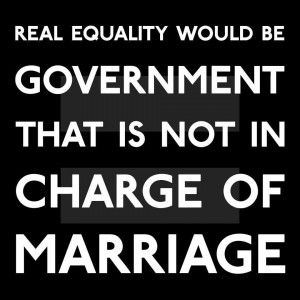 As a conservative Christian, I believe in the sanctity of marriage.:  When I made a vow to my wife before witnesses, I saw it as a vow before God and my friends & family.:  The paperwork I had to fill out and sign for the state of California was just secondary to my marriage, and my marriage vow is something that I will never violate.:  Come hell or high water, “until death do us part” were words that I meant.

The issue of gay marriage is being framed in the context of “civil rights,” which has long been a controversial position in and of itself — the comparison of homosexuals not being allowed to get married to African-Americans being beaten or lynched for sitting at a lunch counter or on the wrong seat on a bus or using the wrong water fountain is quite a stretch.:  But it is in the context of “civil rights” that LGBT activists can not only gain the legal benefits of government-endorsed marriage, but can, at the same time, force Christian churches into submission on the issue of gay marriage.

This, I believe, is the real reason why there has been such a push for gay marriage rather than for universal civil unions — framing the issue as a matter of “civil rights,” LGBT activist groups can push more traditional churches and denominations into performing homosexual marriages, effectively killing two birds with one stone.:  This would, of course, turn a “civil rights” issue into a First Amendment issue, as LGBT activists seek to use the Fourteenth Amendment to subvert the First Amendment.:  Making gay marriage a constitutionally protected activity through judicial fiat would open conservative churches up to the constant threat of law suits and attacks on their 501(c)3 status.

There are some significant legal advantages for citizens that go along with the government’s acknowledgement of marriages, but there is absolutely no reason why those same legal advantages cannot be applied to a system of civil unions, which would not have the same religious implications, freeing up any and all First Amendment issues that would arise out of the government’s re-definition of marriage to include gay marriage.