Major facepalm.[1] Some genius at Royal Dutch Airlines came up with an ad campaign to celebrate the gay movement. Except it seems to do the opposite. On Twitter, they ran an ad that states: “It doesn’t matter who you click with,” they tweeted, “Happy [Pride Amsterdam].” The sad part is two of three sets of seat belts don’t click at all. They just made the point that only traditional marriage works. Not what I think they were going for. Heh.

How embarrassing. Social media tore them apart for the faux pas. In the shredding it was pointed out that their suggestion could get people killed. I think they need a new campaign person and fast. They should retract the ad with an apology and come up with something that makes sense and does what they intended. Not the exact opposite. 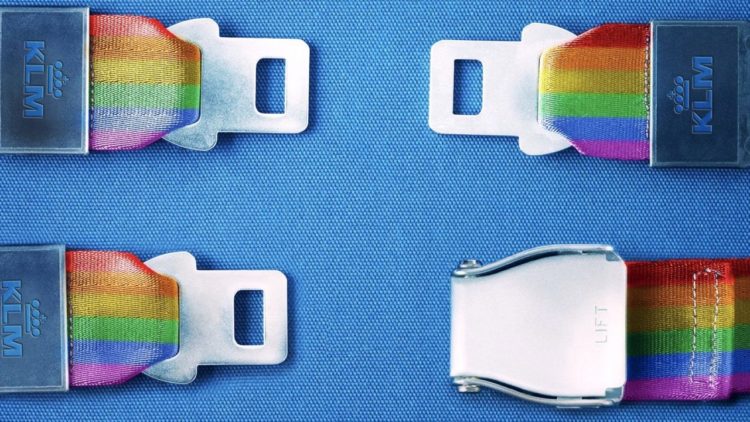 The Royal Dutch Airlines official Twitter account attempted to show their support for the gay movement, but people noticed something rather ironic about their imagery.

“It doesn’t matter who you click with,” they tweeted, “Happy [Pride Amsterdam].”

But, as some on social media noticed, their messaging was off because the seat buckle operation only works one way. And that seems counter to their attempted LGBT messaging.

“Um if you use the top two seat belts and the plane has turbulence, you could die,” said[4] Ben Shapiro.

“Someone might want to explain to this airline that two of those three pairs of seat belts will never actually click,” tweeted[5] Sean Davis.

“Only one of these seat belts will perform the intended function,” tweeted[6] Jim Treacher. “I realize that noticing this means I’m bigoted against the LGBT community.”

Others on social media had a field day with the social justice graphic failure, noting that they accidentally affirmed the primacy of traditional marriage instead.

Royal Dutch Airlines is not responding over this. That’s their second mistake. And no… pointing this out does not make you a bigot or homophobic. It means you are paying attention, which is more than you can say for the ad creator. If a seat belt operates only one way, it doesn’t pair you with anyone by the way. I get what they were trying to say, but this was a major fail.

It’s really very funny. Someone sure didn’t think the whole thought all the way through here. That’s pretty typical these days. I suggest a mea culpa is in order here by the airline and the acknowledgement that this is social justice gone awry.

I suppose for the top two options, you should just tie the ends together around your waist in an emergency. https://t.co/sE8SQDhUMS[7]

Did no one realize that only the hetero seat belt actually works https://t.co/43jwkf9wIt[11]

If you're gay AND nice, you're gold with me, but for goodness sake demand better ad campaigns. LMAO.. https://t.co/fjGHzajPct[13]

When you accidentally affirm the teleology of natural law. https://t.co/B2Pp6AcEs8[15]