This Woman Drops a Truth Bomb on Bruce ‘Caitlyn’ Jenner – And This Facebook Letter is Epic!

The media has been applauding Bruce Jenner as some kind of courageous hero because he has been, for all intents and purposes, playing dress-up and pretending that he’s a woman because he’s wearing makeup and a dress. But this real woman just posted an epic letter to Bruce Jenner explaining what true courage as a female is.

Bruce “Caitlyn” Jenner is a talented Olympic athlete with a serious mental disorder. She is endlessly praised in the media for embracing her illness, as if he’s a hero for spending millions of dollars to look like a woman.

But how does it make Bruce a hero? There are real women who struggle with the pressures of life every day. That’s why this Facebook letter to Jenner is the best I’ve seen. It explains to him EXACTLY what a female hero means: 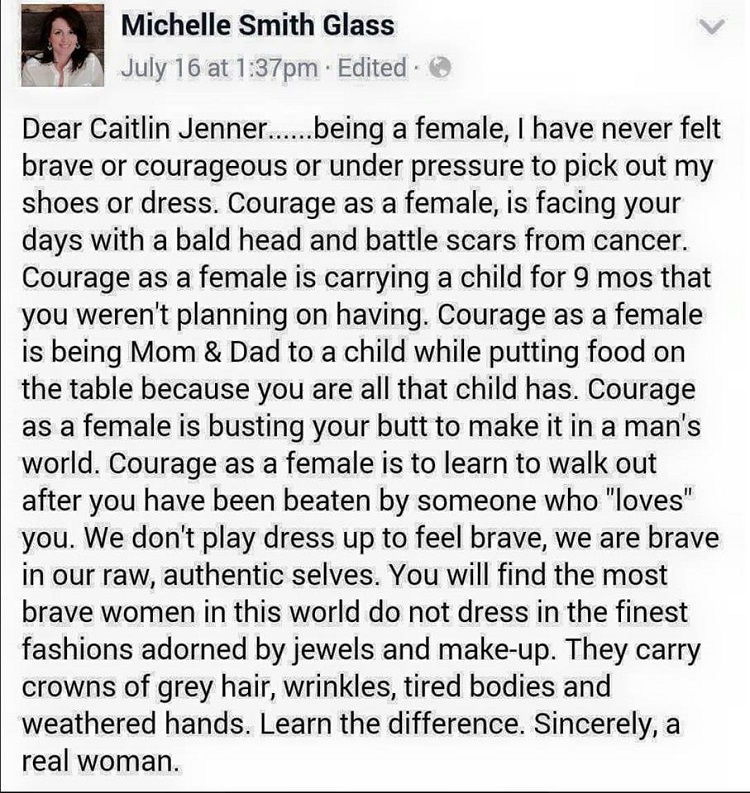 Why are we letting Bruce Jenner continue on with this façade, parading himself around as some kind of paragon of bravery and femininity, when all he’s doing is peddling in the stereotypes of what being a woman means. Gosh, it’s almost like a man wouldn’t understand what being a woman is all about, isn’t it?