Mother Brags Of Young Son Wanting To Dress In Drag, Journals It All On Social Media

While watching RuPaul’s Drag Race with her son, a Twitter user by the name of Mikli Feria Jorge claims her young son wanted to be like the drag queens he saw on television. Jorge broke out her makeup kits and let her son go to town.

She then chronicled the transformation on Twitter for the world to see – and criticize. 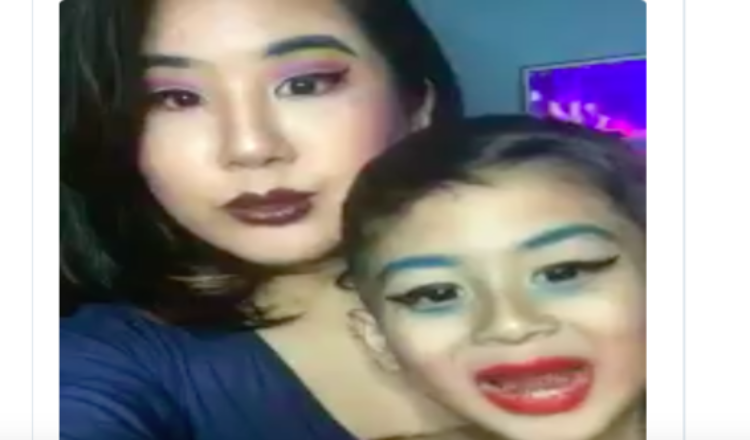 Her first tweet was four pictures of her son applying makeup and appearing to have fun doing it.

We were watching RuPaul's Drag Race last night and this little one was, "I want to do that also!" pic.twitter.com/fgCWvvyLUr[2]

He had me do his wings, insisted on eyelashes, ate carefully to not ruin his lipstick, &

Me: You're beautiful!
K: Ma, we need to buy a wig. pic.twitter.com/eAsq6ZaTvZ[4]

And the finished photos of the look, complete with a dress…

But the disturbing part about this whole thing is one picture in particular, which some people are calling inappropriate. I suppose that is up for interpretation, but you have to admit that this is a little much.

You can see that photo here[8]. I don’t feel comfortable including it in this article.

Now kids usually play with makeup so I don’t know that this is one of those horrifying moments of childhood innocence being ruined, but I think this mother took it too far when she put her son in a dress and plastered it on the Internet. Why? Because say this kid doesn’t grow up to be a drag queen or transgender, how is he going to feel knowing that these pictures are permanently stuck on the interwebs? His friends could see them and you know how kids are – they are ruthless little bullies when they want to be. I don’t know that I could do that to my child. How about instead of using them for political points, you don’t splatter pictures in a place where they will never be able to be removed? Everyone can agree that young children can’t give properly informed consent, so why would you do this?

The ultimate irony is that according to Daily Wire, she is an author of parenting articles, including one titled “Being Raised By the Kids You Are Raising.”

Again, kids like to play dress up, but that doesn’t necessarily mean you need to use that to record every moment, just in case they’re embarrassed by it later. (You know how kids are.)