Talk about sore losers. We are starting to see the GOP country club set getting petulant, aren’t we? 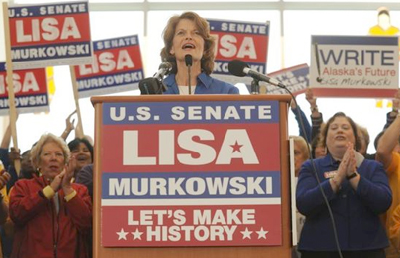 First was pouter Mike Castle who lost his incumbency to Tea Party insurgent Christine O’Donnell in Delaware. Castle is refusing to back the voter’s choice[1] and he’s gone off whining about the tough campaign that O’Donnell waged. Boo hoo, Mickey, boo hoo.

Now we get sore loser Lisa Murkowski of Alaska pulling her own little stunt. She just lost her Senate seat to another Tea Party backed candidate, Joe Miller. But instead of acquiescing to the will of the voters, Murkowski is petulantly launching a write-in campaign for herself[2]!

So I guess Murkowski hasn’t had enough of the power of being a Senator and is having a bit of trouble accepting the voter’s will because now she is launching a ridiculous writein campaign. She is sure to be wholly embarrassed by the outcome if she sticks this thing out all the way to November, but she also might just hurt the real nominee just enough to allow a Democrat to win right when Democrats are losing big time everywhere else.

Even Senate Minority leader Mitch McConnell (R, KY) has told Murkowski that if she does pulls this nonsense he will not support her[3].

For her part, Gov. Palin is advising Murkowski to take her loss like a man and accept the outcome of the primary. On her Twitter account, Palin has a little message for the soon to be former Senator: “DON’T RUN.” 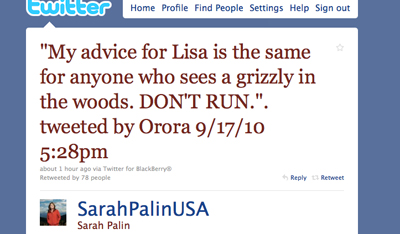 Hopefully the wave of support that the GOP is seeing in the ramp up to November will be strong enough that Murkowski’s little stunt won’t hurt Republican Joe Miller. The polls will have to be watched closely if Murkowski persists with this foolishness to see.

Yeah, it looks like the RINO sector is having its little temper tantrum, doesn’t it?