To listen to Democratic Party interest groups, the key to more full-time jobs at higher wages is either a mystery or only achievable more than five years after one elects Fast-Talking-Democrats to Pass-Fast stimulus and Obamacare laws. 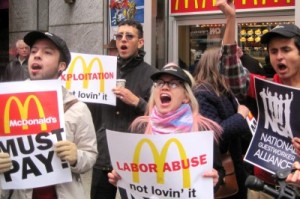 [1] But then there is the actual history of similar experiments that, before Obamanomics made sure the Housing Bust wrought a Great Recession-turned-permanent-jobs-recession; turned WWI into a Lost Generation, a 1929 stock market crash into the Great Recession and Watergate into Jimmy Carter’s triple-double-digit unemployment, inflation and prime interest rates.

Seeking to increase pressure on McDonald’s, Wendy’s and other fast-food restaurants, organizers of a movement demanding a $15-an-hour wage for fast-food workers say they will sponsor one-day strikes in 100 cities on Thursday and protest activities in 100 additional cities.

As the movement struggles to find pressure points in its quest for substantially higher wages for workers, organizers said strikes were planned for the first time in cities like Charleston, S.C.; Providence, R.I.; and Pittsburgh.

The protests have expanded greatly since November 2012, when 200 fast-food workers engaged in a one-day strike at more than 20 restaurants in New York City, the first such walkout in the history of the nation’s fast-food industry.

“There’s been pretty huge growth in one year,” said Kendall Fells, one of the movement’s main organizers. “People understand that a one-day strike is not going to get them there. They understand that this needs to continue to grow.”

The movement, which includes the groups: Fast Food Forward: and: Fight for 15, is part of a growing union-backed effort by low-paid workers – including many Walmart workers and workers for federal contractors – that seeks to focus attention on what the groups say are inadequate wages.

The fast-food effort is backed by the Service Employees International Union and is also demanding that restaurants allow workers to unionize without the threat of retaliation.

Yes, before we picket and ask “Would you like fries with that?” one more time, let us first raise taxes and: regulations[3]: on job producers and cheap energy providers, wreck the health care and private health insurance industries,: force fast food companies to reduce hours to part-time, raise the price of chicken to record levels, and re-elect those that accomplished the foregoing. And oh yes, grant amnesty to millions of illegal immigrants that will work for less than minimum wage…but first…

Hey you scab, you can’t have that Big Mac until Occupy Ronald McDonald House craps on a police car on YouTube!

This post was used with the permission of Joe for America[4].